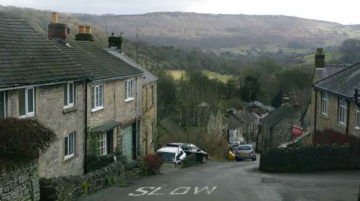 Lifelong residents of Stoney Middleton Ken and Betty provide us with a unique insight into village life from the second world war onwards.

Recorded in 2014 Ken provides us with an in-depth understanding of the mineral processing activities which were at the very heart of the village for hundreds of years. His time at Cavendish Mill at the top of Middleton Lane and at the Paint Mill in Middleton Dale, now known as Rock Mill gives an insight into the processors and how it was to work there.

Betty, recorded at the same time tells us the story of her family’s activities at Goddards quarry, which during her younger years operated lime kiln’s, before becoming a Roadstone quarry.

Thank you so much to you both for taking the time to talk to us.

In loving memory of Ken who passed away in 2018.

Ken and Betty introduce themselves and tell us how they came to live in the village.

Ken and Betty talk about life during WWII, their memories of bombing in Sheffield and the Tarmac plant in the village. The importance of listening to the wireless to receive information on friends and family fighting in foreign lands.

They recall the prisoner of war camp and its various residents which was located in the village near Calver.

Ken and Betty take us back to the village as they remember it. A time when you knew everyone, no-one locked their doors and neighbours would just pop in. Local industries which were more prevalent at that time, and the five pubs which provided for their workers. Pubs which were at the at the centre of the social life and a scary place for a young 17 year old Ken, for his first sneaky half.

Bettey explains about her famioy and the Lime Kins at Goddards quarry. The two kilns were the last two kilns to operate in the village which once had numerious in middleton dale.

Ken worked at Cavendish Mill for many years and provides a very interesting insight into how the plant became to be, how it worked, and what it produced.

Ken tells us about his days running the Paint Mill which was located at the current Rock Mill site. The site processed barytes from Cavendish Mill, grinding and drying material for making paint.