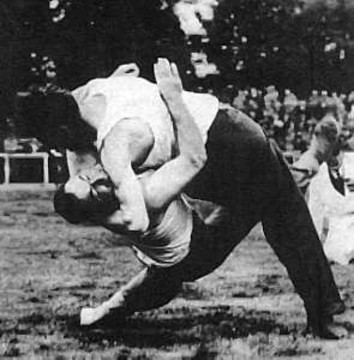 William Capps lived in Stoney Middleton at the end of the 17th century, and was a master in a particular style of wrestling and particularly famed for the remarkable fact that he was never beaten.

William Capps, gentleman of Stoney Middleton was born at the end of the 17th century. Little is known of the family’s history or where they originated from. The exact place of residence cannot be pointed out with certainty, however parish pedigree records by Thomas Norris (1799-1860) state that the Bower family, who were originally from Ashford in the Water, had a large farm and corn mill under the Duke of Devonshire and were also owners of a house and land at Stoney Middleton. Records suggest this house and land was purchased for a family named Capps which became extinct on the death of William Capps in 1703. The Bowers sold the property at Stoney Middleton in the early 19th century.

Mr Peter Furness wrote in the Reliquary of 1863-4

Tradition informs us William Capps was a man of herculean strength, combined with superior activity, dexterity and courage. He excelled greatly as a wrestler and invariably vanquished and over threw all comers. In these encounters he was never known to fall or to be thrown. Evidence suggests William Capps practiced a stand up style of wrestling similar to the Cumberland and Westmoreland style. It bears enough of a resemblance to Scottish back-hold, which is practiced just north of the border, for them to be classed under the joint heading North country style

The starting back-hold position involves the wrestlers standing chest to chest, grasping each other around the body with their chins on their opponent’s right shoulder. The right arm of each contestant is positioned under his opponent’s left arm. Once the grip is taken the umpire gives the signal to start the contest by calling en guard, then wrestle. The wrestlers attempt to unbalance their opponent, or make them lose their hold, using methods such as lifting throws known as hipes, twisting throws such as buttocks and trips like the inside click, cross click, back heel or outside stroke. This is known as a fall. If any part of a wrestler’s body touches the ground aside from his feet then he loses. If both fall down at once the last to hit the ground is deemed the winner. If it is unclear which wrestler hit the ground first the fall is disqualified and must be started again. this is known as a dog fall. A win can also be achieved if either party loses his grip on the other while his opponent still retains his hold.

William Capps in addition to his other talents, was a famous horseman. Peter Furness writes:

He died a bacherlor at a mature age, at his death the family name became extinct. He was inferred in the Nave of the church in Stoney Middleton, and a mural monument was erected in his memory. It consisted of a slab with the inscription

IN MEMORY OF WILLIAM CAPPS,

Death with his dart,Time with his glass combines

Cheer up Dear Soules, These to your Spirits brings

Blessed Hallalujas to the King of Kings:

Above the inscription in white marble, was a well executed effigy of Capps on horseback, no doubt designed by the sculptor to convey to posterity an idea of his excellent horsemanship.

The history of this monument is somewhat curious and interesting. Owing to its dilapidated and ruinous condition, the Nave of the church was taken down and rebuilt in the years 1758-9. The monument of Capps was removed and placed on the outside wall in front of the new building. In a few years the action of the atmosphere disintegrated the statuary marble, and completely destroyed the effigy. The slab containing the inscription alone remained, affixed to the wall by strong iron cramps. When what is called a restoration of the church took place in 1861, the slab offended the taste of someone, and the last remnant of this once handsome and admired monument of the gallant, generous,and honored Capps, was torn from the wall and cast on the ground, where it now lies, near the south-east angle of the church

The slab is no longer in the churchyard there is no record to what became of the slab. His name lived on till the early 20th century through the names Capps Close, Capps Barn and Big Capps Close, which once occupied the village, these acted as the last perpetuate to the memory of WILLIAM CAPPS.

With thanks to Neil Maltby by whom the above article was kindly researched and provided.

Administration of the estate of William Capps senior

Below is a transcription of the administration of the estate of William Capps senior to his son Wm junior and of the inventory of Wm the elder’s goods. It was kindly transcribed by Glenn Trezza from Boston MA USA to whom we are very grateful. Glenn also comments.

It looks like he had two properties when he died, a main home consisting of “the Parlour (sort of like a modern home’s “lounge” (what we in the states would call a “living room” or ironically, a “parlor”), the House (the various other more workaday rooms, including sometimes the kitchen), and various “Chambers”, “bedrooms” in modern parlance), and also “the old house” presumably an older, smaller home he’d lived in before he was as well off as he was later in life.  He socialized with the upper crust of Stoney seemingly–James Fynney, Robert Wright, and William Tomlinson, who appraised his goods, were all local well-to-do gents.

William Capps and Wm Jackson, who signed off on the adminstration were Wm’s son and probable son-in-law. Daniel Howson was a local.  Not sure if just a friend or somehow related by blood or marriage to Wm Capps senior