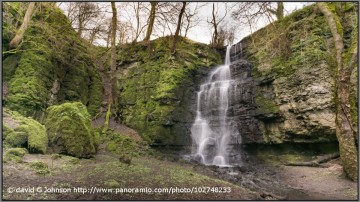 The story of the caves of Stoney Middleton Dale is not complete without a description of swallow holes, where all the water that flows through the caves goes underground. There are several obvious swallow holes, but others keep appearing. One was found recently in the garden of a house in Eyam, and is currently being dug by cavers, one of whom is the householder!

The most prominent swallow hole is Waterfall Swallet, to the north of the road from Eyam to Foolow, by the sharp bend in the bottom of the dip. A huge volume of water can disappear underground here, and it is very spectacular in flood conditions. A low crawl entrance on the right of the path down into the shakehole leads into a cave which can be followed to a depth of 140ft below the entrance. The stream disappears into boulders and mud, and there is no room to dig. It reappears 200ft lower at the Boil-up in Glebe Mine, from where it flows out to daylight via Moorwood Sough, the mine drainage level which emerges to daylight by the church at Stoney Middleton.

Little Waterfall Swallet lies immediately east the main swallow hole. It can also engulf a large stream, but efforts to follow it have so far proved inconclusive. Like the main stream, it reappears at the Boil-up in Glebe Mine.

Other swallow holes have almost certainly been buried over the years. Crosslow Cavern was a natural cavern reached via a 60ft mineshaft, but this is now blocked.

The next significant swallow hole is Hungerhill Swallet, a large shakehole nearer to Eyam on the north side of the road. Excavated in the 1980s, a spectacular cave 250ft deep was found. It includes a large pitch of 130ft, big chambers with impressive calcite formations, but also some very tight squeezes and loose boulder chokes. The stream is almost certain to emerge in Glebe Mine, though probably not from the Boil-up.

In 1846 local historian William Wood described the Pippin Swallow, but it was lost. When Glebe Park was built on the site of Glebe Mine, it was found that a shallow valley had been unfilled with what was, in the mid-1800s, mining waste. The stream that ran down the valley had been culverted, into a swallow hole! The enclosure was known as Pippin Close. Excavation was attempted, but nearby houses were threatened if the hole was deepened any further and it was abandoned. The swallow was filled in with concrete, but it solved a long-standing mystery.

In ???? cavers discovered an extensive series of mined and natural passages in Glebe Mine that had not been seen for many decades. They lie at high level in the western part of the mine, and extend to the north and west of the village. There a mine workings of a type not often seen in the area: these are pipe workings. Rather than a discrete vein, the mineralisation has spread into the limestone by dissolving a soluble horizon, in this case likely to have been the Lower Shell Bed. So the Doom series of workings includes some large caverns.