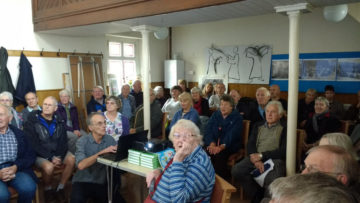 The Wesleyan Reform Chapel in Stoney Middleton was packed to overflowing on Saturday morning 14th October when more than 100 people attended. The occasion was a hands on history event looking at the boot and shoe makers’ strike of 1918 – 1920. Many thanks to everyone who helped and came along. We were heartened by the interest shown and grateful for all the questions, comments and suggestions. Thanks too to those of you who brought photos and other items to show us.

Participants heard short talks from Phil Taylor about the history of boot and shoe making locally, and Steve Bond who has been doing research into the strike. They then had a chance to ask questions and look at a wide range of photographs, maps, census extracts, newspaper articles and other resources shedding light on an extraordinary event which took place nearly 100 years ago. Older local residents were able to identify individuals in some of the photographs and on census extracts to help build up a more accurate picture of who was involved.

Steve Bond said “We were delighted with the turn out and the interest shown. It was great that people of all ages came along. We think it’s really important to tell the story. We want to give a voice and proper recognition to the local people who risked so much to support workmates who were dismissed, and try and improve conditions in the boot and shoe factories. If anyone is interested in taking part or helping us organize commemorations next year we’d love to hear from you. (see e mail addresses below) A planning meeting is being held shortly in Stoney Middleton.

However, there are still gaps in our knowledge about the strike and the villages at that time. We are especially keen to hear from anyone who has information about women’s experience of work, the strike and the First World War. We also want to know more about the companies involved, the bands who played lively music in the strike parades, and the legacy of the strike in Eyam and Stoney Middleton.”

The next step is to get arrangements underway for the planned parade and special anniversary service in Stoney on April 14th 2018. If you Can help in any way please get in touch. The first planning meeting will be held In  November. You can contact me at:

If you have information, or you’d like to know more about what’s being planned, please contact Steve at steve.bond@pop3.poptel.org.uk   or Phil at philipjtaylor@live.co.uk