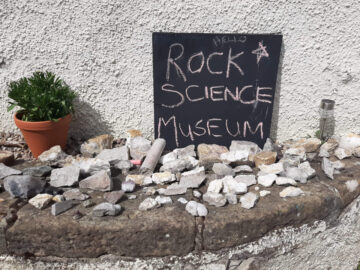 A local Stoney Middleton family have been very busy during lockdown… young budding Paleontologist and Petrologist Harper Renshaw, along with her Mum Jaeger and Dad Matt, have discovered some very rare fossils in the local quarries.

They were found about 3 weeks ago, the first being what appears to be the fossil of an ancient fish which was found by Dad Matt in Goddard’s Quarry. Mum Jaeger said “the fish was found where you can tell that the sea level was due to the ledges being carved into the rock. We were searching for fossils and gems for Harper’s rock collection when we came across them. We didn’t have to dig them  out either.”

Another, which appears to be a lizard was found in Dalton Quarry, incredibly they are true-form fossils, almost entirely preserved in their natural form.

As well as Harper’s love for fossils she has collected lots of beautiful stones and gems. At the beginning of lockdown she decided to display the rocks on the wall outside her home, so people on their lockdown walk would have something beautiful to look at. Her Mum Jaeger said “a neighbour mentioned about having an optional fee to view. She didn’t think that anyone would pay, but she raised £16.25 for ‘Your kids around the world charity’, a charity that sends donations and materials overseas to children who live in poverty which buys them the essentials that they need. It also goes to freshwater resources and medications.”

The family are keen to preserve the discovery and have very kindly offered the fossils on loan to the forthcoming Heritage Centre.

The above shows the true form lizard and fish fossils.

Below a selection of other fossils and minerals from Harper’s collection.