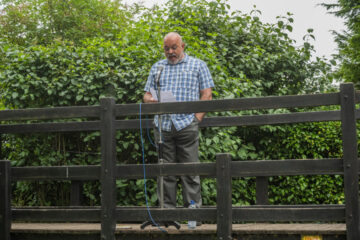 Stoney Middleton was the scene of a moving and unusual event on 24th July. A plaque was unveiled in tribute to boot and shoemakers of the village and neighbouring Eyam who took part in a historic strike over one hundred years ago.

People gathered in the Grove Garden to hear speeches, and music from the time of the First World War and the strike. There was a welcome from Chris Tsielepi, Chair of Stoney Middleton Parish Council.  Banners made by Eyam primary school children, and another from Chesterfield Trades Council adorned the walls. And an exhibition about the strike was displayed around the garden, including a list of all the local people who were involved.

One of the speakers, the historian Cathy Hunt, pointed out how few public memorials there are to trade unionists. She emphasized the bravery of those involved in the strike, especially the women. Employers thought women would never dare to ask for more or object to poor working conditions. However intricate their work was, they were seen as unskilled which in the employers’ eyes justified their low wages. But the women of Stoney Middleton and Eyam were made of strong stuff. They and their male colleagues were on strike for nearly two and a half years and then set up their own cooperative factory. This is believed to be the longest strike in the footwear trade in England and one of the longest involving a group of women in any industry.

The plaque was unveiled by Richard Coates, grandson of one of the strikers, Harry Dawson. Richard spoke about the poor working conditions in the factories and how his grandad was sacked after 30 years service to one of the Eyam firms. He then became active in the union.  Richard also paid tribute to his mother Doris Coates who wrote about growing up in Eyam and  the impact of the strike in her memoirs ‘Tunes On A Penny Whistle ‘. This brought the story to a much wider audience.

Richard was joined by two other descendants of people involved in the extraordinary events of 1918-20. One was Neil Barber, whose grandfather William Nelson Barber was one of the first to join the union in 1918. Neil also had two aunts, Maggie and Bertha Barber involved in the strike. The other was John Mortimer, from Sheffield whose great great grandfather was the trade union leader, Will Thorne. Thorne was an MP at the time and asked questions in Parliament about the strike. He visited Eyam in June 1918 and spoke in support of the strikers.

Other speakers were Derbyshire Dales District Councillor, Peter O’Brien, and James Eadon from Chesterfield Trades Union Council. James spoke about the continuing importance of trade unions today, in rural areas as well as towns and cities.  Tunes and songs from the time were played by  Eyam musicians Andrew Couldwell and Andy Hoult.

A similar plaque is to be unveiled in Eyam on Tuesday September 14th at 2.30pm  on the village (stocks) green. Children from Eyam Primary School and descendants of families involved in the strike will take part. More details are available from steve.bond@pop3.poptel.org.uk