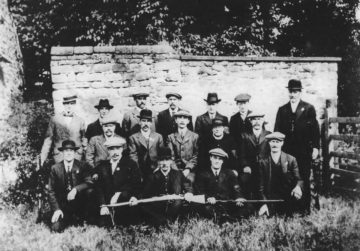 Kindly provided by Ian Cox this is the first picture we have seen of the Stoney Middleton Royal Defence Corps (RDC), forerunner to the Home Guard as they were renamed during WWII. The role of the corps was to provide troops for security and guard duties inside the United Kingdom.

Can you name anyone? The photograph has the following names on the back, if you can provide any information about them or their activities, or even where it was taken please let us know.

The corps, part of the British Army was formed in March 1916 and disbanded in 1936. It was made up of men left behind, being too young, too old, or in reserved occupations, for Stoney Middleton this would have included boot makes, producing boots for the Army.

It was initially formed by converting the (Home Service) Garrison battalions of line infantry regiments, men soldiers either too old or medically unfit for active front-line service. The guarded important locations such as ports or bridges and provided independent companies for guarding prisoner-of-war camps.