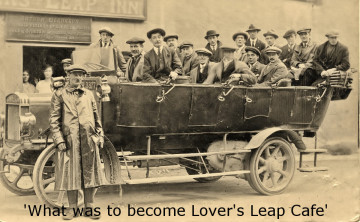 The following content has been written by Geoff Birtles, himself a renowned climber . He has a wealth of experience and knowledge of climbing in and around Stoney Middleton Dale and has also published many articles and books on climbing.

The content covers the full history of rock climbing in Stoney Middleton Dale from the early 19th century to the present day. Drawing on his own personal experiences and  memories Geoff provides us with a factual and fascinating account of Stoney Middleton important part in the history of climbing Britain.

There were many attractions to Stoney Middleton that made it one of Britain’s most popular rock climbing venues for some 30 years from the 1960s right through the ’80s, in particular convenience. Here, there were the human creature comforts of adventure cushioned by companionship, warmth, even a few pubs and of course the Lover’s Leap Cafe, that eponymous watering hole known as ‘I’ll see you at the cafe’; not Hathersage or Matlock but Stoney Learn More

A lot of climbing was done in the last few centuries in the Stoney Middleton area as anybody who has ventured down the caves and mines thereabouts will testify. However, the first recorded above ground activity of rock-climbing for recreational purposes hereabouts was by Henry Bishop in an article entitled ‘Climbs on Mountain Limestone in Derbyshire’ in the 1910 Climbers’ Club Journal … Learn More

Apart from JW Puttrell’s newspaper articles, very little was written about limestone climbing after 1918, until 1961 when the Graham West guidebook, ‘Rock Climbs on the Mountain Limestone of Derbyshire’, was published. However, in the early 1930s, Eric Byne and Clifford Moyer climbed some routes of which there are no known of specific records but more importantly, 1933 saw the first ascent of The Great Ridge now known as Aurora, a landmark in the history of rock climbing…Learn More

Joe Brown and The Valkyrie/Rock & Ice

From 1933 there is no known of climbing here until Joe Brown and others from the Valkyrie Club took an interest. Joe recalls starting to climb there from about 1950 and such was the way then that they climbed in any weather, so much so that he recalls a snow blizzard so severe that they actually failed to find Stoney Middleton at all.…Learn More

By 1957, a whole new generation arrived in the dale from nearby Sheffield and in particular the University. This group, largely spearheaded by Dave Johnson and accompanied by such as Trevor Brooks, Jack Wade, John Childs and their mentors, Ron and Brenda Salt. Brenda was a teacher in a comprehensive school in Sheffield and was already climbing with her husband Ron when some of her students begged to be taken out. One of these, Dave Mellor, was on the first ascent of Windhover and went on to climb Everest…Learn More

In the early sixties, Barry Webb a noted exponent of gritstone climbing ventured on to the Stoney crags accompanied by a SUMC member, Charlie Curtis. What came from this were the four very fine routes of Mortuary Steps, Brown Corner, Padme and Compositae Groove….Learn More

The guidebook, Rock Climbs on the Mountain Limestone of Derbyshire by Graham West was published by the Manchester Gritstone Climbing Club in 1961 and was probably the first guidebook to limestone climbing in Britain and historically is not to be underestimated in its influence on the development of climbing throughout the UK. …Learn More

The late Lennie Millsom was known affectionately as Legger and was Sheffield’s answer to Joe Brown; of similar build with an exceptional technique often in bendy boots. He was notably a gritstone climber and though he only made one new route, Medusa, at Stoney, it was one of the best of its time. …Learn More

Rock Climbing at Stoney Middleton in the 1970s

Once upon a time, there was a young lad called Tom Proctor, a doyen in the subtle art of apparent naivety. He grew up on a dairy farm on the Peak side of Chesterfield and was within easy cycling distance of the crags …Learn More

In 1968 the late Tom Proctor went up to Windy Ledge and attacked the vicious, outrageously undercut flake right of Scoop Wall. Geoff Birtles said The Lord’s Prayer and seconded. Proctor and Birtles had climbed Our Father the hardest route in Britain. …Read More