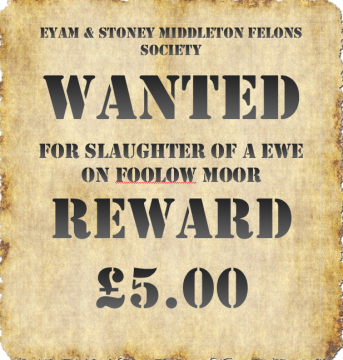 This fascinating organization was formed in 1812 by local residents of Stoney Middleton and Eyam and had something of the character of a very early Neighborhood Watch scheme.

The following extract is taken from the village book written by Graham Armitage. ‘Discover Stoney Middleton – The forgotten village’ Buy the book here.

One point that is in some dispute is that, according to some, the association should be strictly referred to as the Eyam Felons Society (this apparently being formally reconfirmed at a meeting of the Society in 1977) having been originally envisioned by Eyam residents despite the consistent and on-going involvement of inhabitants of Stoney Middleton. However, the late John Hancock insisted that the correct title is the Eyam and Stoney Middleton Society for the Prosecution of Felons, the revised name coming into operation after the First World War. John was certainly a good source of information on this subject; his father was Secretary of the Society until John himself took over for many years, and was then succeeded by his son James who holds the post to this day.

When I visited them, they proudly showed me a knife which had been presented to John and all 30 members at a dinner in 2012 commemorating 200 years of the Society. Amongst the crimes tackled by this approach were theft of livestock, rick burning (the ‘slaughter of a ewe’ on Foolow Moor merited the offer of a reward of £5) and, on one occasion, the appalling scandal of the ‘theft of a ferret’. Equally, in 1839, the Society paid ten shillings to a Mr William Booth (a police officer) for his trouble in coming over from Bakewell to investigate the dreadful incident of, ‘The Robbery of Reverend Bagshawe’s Potatoes.’ Clearly, the area was going to the dogs and the forces of law and order hanging on by the merest thread!

Members were required to pay a bond to join: originally 10 shillings but rising to £1 by the 1850s. Meetings generally alternated between the Miners Arms in Eyam or The Moon, occasionally deviating to the Bulls Head (Eyam) and the Royal Oak (Stoney Middleton). The first Secretary of the Society, Mr Peter Wright of Eyam Hall, had a descendant, Robert, who became a Crown Prosecutor in the modern era.