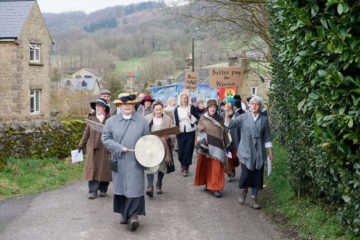 Eyam and Stoney Middleton were alive with the sounds of a silver band, singing, and dramatic voices as local people commemorated the 100th anniversary of the boot and shoemakers strike of 1918.

A lively ‘re-enactment’ captured the passion of the bitter dispute, which lasted for over 2 years. Children from Eyam School made banners to mark the event, using the soles of their feet to create a vibrant pattern. A procession from Eyam joined marchers in Stoney Middleton. The Castleton Silver Band led the parade to St. Martin’s Church, with modern day trade union banners representing the unions involved 100 years ago, and people wearing clothes (and hats!) of the period. The event marked the exact date, April 14th 1918, when the Reverend John Riddlesden held a service at St. Martin’s in support of the strikers.

The event was very kindly photographed by Peter Nutkins Photography (view full photo gallery). Proceedings in the church were filmed and broadcast live by Bowring Productions who kindly undertook this volentaraly into a marquee in the church grounds. (the recording can be viewed here). Our gratitude is extended to both.

Local shoemaker Philip Taylor introduced the community service, which featured descendants of families involved on both sides of the dispute reading extracts from letters and descriptions of working conditions and village life 100 years ago. Children put on a dramatic poetry performance, and local vicar James Croft reflected on the meaning of the original 1918 sermon based on a question from Genesis, ‘Am I my brother’s keeper’? Hymns were chosen to reflect the non- conformist tradition in the villages, as well as the spirit of the 1918 service.

An exhibition in a marquee told the story of the strike, and will be available for use by local schools, history and community groups. (Contact stoneymiddletonheritagecentre@gmail.com for details). A permanent exhibition will also be opened in Eyam Museum.

The event was made possible by the hard work of many volunteers and local groups, including Bowring Productions, who streamed the proceedings, SMILE and the Stoney Middleton Well Dressers who loaned and erected marquees, and local residents who helped with the planning, took part in the ‘re-enactment’, made cakes and served refreshments, and acted as stewards.

The event was sponsored by Stoney Middleton Heritage Group through the Heritage Lottery Fund, and by a number of local businesses. It was also supported by Eyam Museum and the two local primary schools. Thanks to everyone who helped and gave their time.