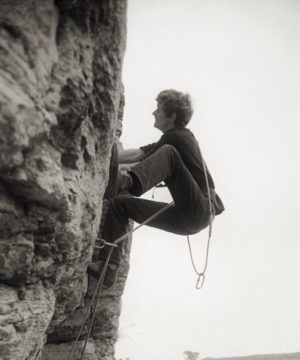 Rock climbing legend Geoff Birtles has successfully published and edited many climbing publications and was a pioneer and motivating force behind many new routes in the Peak District and specifically Stoney Middleton.

He has just completed the Storey of rock climbing in Stoney Middleton for the village Heritage Group. The village is immensely grateful to Geoff who has worked on and off for a number of years to put the full story together; thanks Geoff.

He starts the story;

‘There are not many climbing places in the UK quite like Stoney Middleton; a combination of magnificent cliffs, easy access, balmy micro climate, a cafe and three pubs, all within easy access of major cities like Manchester and Nottingham and, in particular, Sheffield from where the number 84 Buxton bus dropped you outside The Grouse Inn on a dark Friday night. That is how it was when I first arrived there in September 1962, a 15-year old schoolboy about to set out on an adventure that would last a lifetime’.

He continues and tells us;

‘There were many attractions to Stoney Middleton that made it one of Britain’s most popular rock-climbing venues for some 30 years from the 1960s right through the ’80s,’

And one of those attractions, the famous Lovers leap café;

‘it could be impossible to get a seat in the Lover’s Leap and the overspill would spread along the pavement with climbers from all over the UK or even California or Australia. For whatever reason, it was the place to be, to climb, visit or meet up’