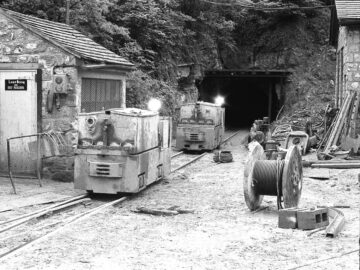 The attached photograph kindly provided by Adrian foster provides an informative image of the railway system used to transport minerals from the mine.

Sallet Hole Mine is a 19th-century fluorspar mine in the centre of Coombs Dale, which closed in 1998. In our post “Fluorspar Production” we provide a link to an article “Fluorspar Mining in Derbyshire” by J V Bramley, (bulletin 11-3). Mr Bramley states that it uses trackless haulage, however the photograph must have been taken after Sallet Hole dispensed with its rail system sometime after September 1984.

Sallet Hole Mine was originally driven as a sough to the workings under Longstone Edge, before being modified into a haulage level in 1840-42. A 32ft diameter waterwheel originally powered crushing rollers here, but all traces of it have been destroyed by later workings.

In the C20th, Sallet Hole Mine was worked for fluorspar, first from 1926-30, and then from 1965. It worked Deep Rake below the depth of the opencast workings on Longstone Edge, and in 1990 produced 73,000 tonnes of ore. It finally closed in 1998, and water still flows from it today. Peak District Mines Historical Society “Stoney Middleton Mining Heritage Walk Report”