Welcome to the Peak District National Park and Derbyshire.

A world of contrasting natural beauty, with moors and dales, rivers, springs and caverns at its heart. The Peak District National Park, known and loved by millions for its breathtaking landscapes, relaxation, inspiration and adventure. Spanning parts of Cheshire, Derbyshire, Staffordshire and Yorkshire in the heart of England, it is home to dozens of market towns and pretty villages, historic houses, famous attractions and hundreds of traditional events. 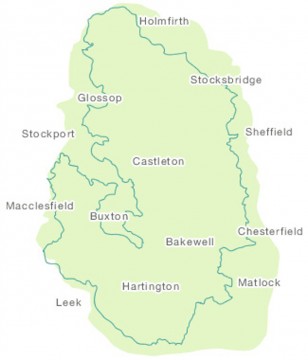 The Peak District has a stunning and varied landscape, visited by over 8 million people each year, who come to enjoy the peace and tranquillity, visit attractions, indulge in the many and varied activities such as walking, hiking, cycling, climbing, caving and more. Explore its towns and villages or simply take in the breath-taking scenery which made the Peak District the first and most visited of England’s National Parks.

About the Peak District National Park

The name Peak District is often used as shorthand for the Peak District National Park, the central and most rural area of the Peaks, with defined boundaries and some special protection.

The name of the district is thought to have come from an ancient tribe once resident in the area, and the hills and moors of the area. Although spectacular in their own way, are not classic mountain peaks as might be imagined from the name.

This was England’s first National Park and is still the most visited, largely because of its accessible location within reach of the large cities of Manchester, Leeds and Sheffield. The Peak District National Park Authority provides public facilities (car parks, lavatories, visitor centres) and works to maintain the rural nature of the park, without turning it into an open-air museum; however, most land is still owned by the traditional landlords, and (although public access is very good) contains working farms and towns.

This is a region of contrasts, with wild moorland, classic walking country which encompasses every kind of activity, from a gentle stroll to the lofty challenge of the Peaks themselves. The leafy lanes and quiet villages are ideal for that feeling of getting away from it all. With picturesque towns such as Bakewell, famous for its wonderful pudding and markets, along with the splendid attraction of Chatsworth House, home to the Duke and Duchess of Devonshire, you’ll be spoiled for choice with places to stay and things to see and do.

From cosy farmhouses and welcoming guest houses to luxurious hotels, you’ll find all the hospitality and comfort you need for a really memorable break. There’s plenty to see, from the famous Chatsworth house, breathtaking caverns where the precious Blue John stone is mined, a trip back in time at the Crich Tramway Village, Edale and the beginning of the Pennine way, or the Dams at Bamford where the Dambusters trained, all set in beautiful scenic countryside.

The Peak District is not mountainous; however, many hills are steep, with a few summits sufficiently prominent to warrant the description peak. The name is a little obscure, but many sources including the National Park Authority’s website, refer to a local 7th-century Anglian tribe, the Peacsaetna (Peak Dwellers).

The Peak District is traditionally split into two contrasting areas, essentially defined by their geology. The White Peak (Derbyshire Dales) is a limestone plateau of green fields with rolling hills and many incised dales in the areas around Dovedale, Bakewell, Monyash, Middleton Dale and Longstone.

The Dark Peak (or High Peak) is a series of higher, wilder and boggier gritstone plateau (moorlands) in areas around Kinder Scout, Bleaklow and Ladybower. High Peak and Derbyshire Dales are also names of local authority districts of Derbyshire.

Flora and Fauna of the Peak District

The limestone dales of the White Peak are nationally famous for rare flora, including orchids (in flower spring and early summer) and the rare Jacob’s ladder, while the peaty gritstone moors of the Dark Peak support a more limited flora (largely heather, bilberry and sphagnum moss) and a specialist fauna.

Heather moorland in the Dark Peak is maintained for the commercial shooting of Red Grouse (a subspecies of the Willow Grouse unique to the British Isles, which differs from its counterpart on the European mainland by not having a white winter plumage). Other specialist moorland bird species include Ring Ouzel, Golden Plover and Curlew. Mountain Hares were introduced to the Dark Peak in the 19th century and still remain on Bleaklow and Kinder Scout, whilst Black Grouse, once extinct are part of a reintroduction scheme to re-establish them.

The Park can be mild and warm when compared to coastal or more remote and exposed locations, however winter can bring some very severe conditions, especially in the High Peak which can experience severe winter weather. Walkers need to be suitably equipped because it can get very cold. Cross-Pennine road routes (particularly the Manchester to Sheffield Snake and Woodhead passes) are quickly blocked by snow in winter weather.

Places to See in the Peak District

The Peak District is a traditional destination for hikers, and it has an important place in the early history of the British walking and rights-of-way movement on Kinder Scout. A number of long-distance walking routes are wholly or partly within the Peak District:

Keen walkers should invest in the Ordnance Survey 1:25000 Explorer sheets OL1 (The Peak District – Dark Peak area) and/or OL24 (The Peak District – White Peak area). Between them these two sheets cover most of the National Park area and show public rights-of-way and Access Land (of which there is much in the Dark Peak). Most outdoor shops stock these and other maps, and there are large numbers of guidebooks with walking routes.

Potholes are limited to the limestone White Peak and are concentrated around Castleton, Buxton, Matlock, Stoney Middleton and Eyam. There are show caves in Castleton, Buxton and Matlock Bath; the more committed should make contact with the Derbyshire Caving Association. Many natural caves were extended overtime by lead miners and their exploration is not for the inexperienced.

The area is renowned as a paradise for walkers, so it’s no surprise that there’s a wealth of fabulous places to explore. With an extensive network of public footpaths and numerous long-distance trails, over 1,900 mi/3,000 km in total within the Peak Park, as well as large open-access areas, there is plenty available for hill walking, rambling and hiking.

The Peak District is the ideal destination for cycling holidays, whether for family rides along the miles of traffic-free cycle paths, such as the Tissington, Monsal, Manifold and High Peak Trails on re-used former railway lines, or for mountain bikers taking on the many challenging trails.

The many gritstone outcrops, such as Stanage and The Roaches are recognised as some of the finest rock climbing sites in the world,whilst the Peak limestone provides many testing climbs particularly in Stoney Middleton which were some of the hardest climbs in the world.

With more than 50 reservoirs and flowing rivers in and around the area, you’ll find yourself in the perfect place for sailing, windsurfing and canoeing with plenty of organised clubs and teaching centres to get you on the water. Some of the area’s large reservoirs such as Carsington have become centres for watersports, including sailing, fishing and canoeing in this most landlocked part of the UK.

Extreme sports addicts won’t be disappointed by the range of activities on offer either; take your pick from mountain biking, climbing, caving or air sports like hang gliding and paragliding to get the adrenalin pumping!

For a more leisurely pastime there is bird-watching, look out for Peregrine Falcons, Buzzards, Red Kites and many other birds of prey.

There are a wide range of outdoor activities on offer to experience in and around the the Peak District National Park, so everyone can find something fun or relaxing to do! With plenty of taster sessions aimed at beginners, the region is the ideal place to try something new.

View more pictures of the Peak District National Park on Flickr (opens in a new tab).