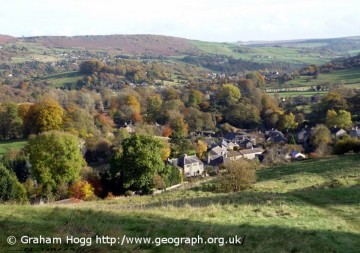 Stoney Middleton is a particularly quaint and interesting village, packed with fascinating heritage and intriguing legends.

Located in the heart of the Peak District National Park, Britain’s premier and most visited Park on the A623 which divides Stoney Middleton in half as it follows the deep and dramatic limestone gorge which cuts through the village. Houses seemingly built one on top of another, cling to rocky ledges fighting for space, providing a picture postcard image of this quaint and unusual dale. View more images of Stoney Middleton on Flickr.

Visitors come to enjoy the walks in and around Stoney Middleton including the Heritage Trails, accompanied by information boards and a guided map.They enjoy discovering the quiet and peaceful backwaters away from the bustle of the road, where many of the village’s intriguing and beautiful listed buildings can be found. Stoney Middleton was originally recorded in the Domesday Book in 1086 and is remarkable today for the amount and variety of historical heritage. It is a very special place retaining a deep rooted traditional village feel.

The Romans came two thousand years ago mining for lead, an extremely rare and valuable metal of the time. Mining for lead and other minerals such as Fluorspar, Barytes, and Calcite, as well as quarrying the limestone itself have continued through the ages, dramatically shaping Stoney Middleton, its people and the landscape. Quarried stone was burned in large dramatic lime kilns to produce quicklime, a soil improver, an activity producing much smoke and poisonous fumes. The practice oddly described in Whites 1857 directory of Derbyshire rather romantically;

The wild scenery of Middleton Dale is often greatly improved in picturesque effect, by the fires of the lime kilns, which are numerous.

It further qualifies the industrial activities in Stoney Middleton Dale by the following description;

In the dale are two cupolas for smelting lead ore, a manufactory of barytes, and several lime kilns.

Stoney Middleton was further industrialised by its very important association with mens heavy duty boot manufacturing , started in 1797 it grew into a major industry by the late 1900’s, controlled by local family dynasties who built many factories in the village. Ethel Williams gave her account of boot manufacturing in Stoney Middleton stating that;

it had a flourishing boot-making industry with six factories, one more than 100 years old, making massively heavy hob-nailed boots, solid enough to last a lifetime and guaranteed to keep out the wet – even in floodtime.

Stoney Middleton had every right to be proud of its industry, for its products were sent to all parts of the world.

Boot making and the invention of steel toe capped boots

Life was hard for the men, women and children who worked in these factories, although probably favourable to other village industrial occupations such as lime burning quarrying or mining. The industrial legacy left to Stoney Middleton is the ‘steel toe capped boot’ invented by resident Harry Heginbotham, originally made for miners in 1933. Remarkably the Stoney Middleton remains home to what is the last remaining safety boot manufacturer in Britain, William Lennons established in 1899 still operate from the former corn mill which they moved to in 1904.

These industrial activities are the reason the village came to be, they sustained it for centuries, dramatically re-shaping it, both culturally and specifically physically by the removal of thousands of tons of limestone, it is a legacy that now contributes to make Stoney Middleton a special place. The quarries are now closed; there empty spaces softened by landscaping are being reclaimed by nature, spaces now enjoyed by rabbits, foxes and badgers, while buzzards and kestrels fly above.

However this is only part of what makes Stoney Middleton Special; the village is home to many listed buildings among them;

Middleton Hall and the Bath House

A magnificent 17th century Manor House, former home to Thomas Denman, the Lord Chief Justice of Britain in 1832. It was Thomas Denman who for the benefit of his workers made major improvements to the Bath House – built to take advantage of the thermal springs, which feed water at a constant 63 degrees Fahrenheit (18 degrees Celsius) to the two baths. One bath is for ladies and the other for gentlemen, they are separated by a wall and measure 3m x 4m and 1.5m deep and accessed by stone steps. It was believed that the waters had healing powers, leading to the construction of a small chapel on the site of the present day church, dedicated to St Martin, the patron saint of cripples.

The chapel was rebuilt in the 15th Century and again following a fire in 1759. The present day church of St Martin is a magnificent building with a very unusual octagonal nave, the older of only two in Britain. It was this octagonal shape which gave inspiration for the design of the Toll House.

Built to take tolls for using the newly created road through Stoney Middleton, saving travellers from the more arduous trek up High Street, said to be the steepest in Britain. Its curious octagonal shape is further heightened by its use as a chip shop, the only grade two listed chip shop in Britain.

At the bottom of the High Street, across from the Moon Inn is the village Cross, erected to celebrate the repealing of the Corn Laws, laws which had inflicted much hardship on people of the early 1840’s. They imposed bans on the importing of all grinding cereals resulting in highly inflated prices inflicted by greedy landowners.

The village is further renowned by its association with the adjoining village of Eyam; popularly known has the ‘Plague Village’ due an outbreak of Black Death in 1665. The quarantined village relied upon residents of Stoney Middleton and others to provide them with essential supplies, exchanged for vinegar soaked money left at the Boundary Stone which successfully contained the spread of the disease.

Notoriety continued to attach itself to Stoney Middleton during world WWII when two German bombers successfully bombed the quarries, despite a military encampment established to deter such an event. The camp was latterly converted to a Prisoner of War Camp to house Italians, Germans and latterly displaced persons, occupants who lives would be changed forever by their chance association with Stoney Middleton.

Folklore and Legends of Stoney Middleton

However the story of Stoney Middleton is a far from told. History has provided the village with some fascinating folklore and legends, stories born from factual events occurring 100’s of years ago.

In 1762 a heartbroken young woman by the name of Hannah Baddaley, jilted by the love of her life William Barnsley attempted to end it all, throwing herself from the cliffs. Remarkably she survived with few injuries; to commemorate her remarkable good fortune a building at the foot of these cliffs still bears the name ‘Lovers Leap’.

A little earlier in the century, Stoney Middleton and surrounding district was living under the perilous threat of being held up by Black Harry, a local highwayman who preyed on travellers across the moors, eventually caught he was hung drawn and quartered before being hanged in a gibbet as warning to others.

Murder at the Moon Inn

A further story of misfortune and death beheld a Scottish peddler who having reported fellow unlicenced peddlers selling their wares at the neighbouring village of Eyam during the annual wakes. He was followed back to his residence for the night, there followed what became known as the Murder at The Moon Inn. Under the cover of darkness and the ‘turned head’ of the landlord his body was taken on horseback to be disposed of down Carlswalk Cavern, an old lead mine at the edge of the village. The murder lay undiscovered for 20 years hidden in the depths of the cavern until by chance his body was discovered and later identified by the distinctive buckles on his shoes. It was a brutal and unnecessary murder and may well explain why so many people have claimed that to this day he still haunts the pub and the cavern.

Today Stoney Middleton attracts visitors to its current heritage and it is in the village each year that the ancient custom of Well Dressing continues, a festival of thanks for the abundant water. The wells are dressed with large pictorials using flowers, petals, seeds, leaves, moss, bark and other natural products set in clay clad upon large boards, requiring weeks of dedicated work by the community.

Stoney Middleton’s remarkable Geology a deep limestone gorge created over millions of years from the remains of tiny sea creatures, later volcanic activity allowed dissolved minerals to circulate through joints in the limestone, eventually forming veins of lead and other valuable minerals. Over millions of years the movement in the land mass forced the rock upwards forming peaks, whilst several periods of glacial activity created fast flowing melt water carving out the valleys we see today.

It was these dramatic crags that led rise to Stoney Middleton becoming world renowned for rock climbing, attracting among others Chris Bonnington, mountaineer and conqueror of Everest. Stoney Middleton was the epicentre for climbing in the 60’s and 70’s having some of the hardest climbs in the world. Today it continues to attract climbers for far and wide, to relive the great heyday of limestone rock climbing in Britain. The geological formation of Stoney Middleton dale assisted by thousands of years of lead mining have provided an extensive network of caverns and caves, some of the most impressive in Derbyshire. They attract hundreds of recreation cavers, enjoying their easy access and through routs, while serious cavers continue to explore and search for what many believe will be the next big find.

Nature lovers will undoubtedly spend time in Coombs Dale a superb limestone valley, a Special Area of Conservation extending to 230 acres encompassing a wide range of nationally important wildlife habitats. It is a spectacular secluded dale that has escaped the ravages of modern agriculture and is a refuge for many of our most threatened species, a poignant reminder of an ancient landscape long since wiped out in many other parts of Britain. Sheets of colourful rock plants tumble over the stony terraces including a range of plants, cultivated in gardens as alpines. In places woodland, rock and grassland plants intermingle producing a floral spectacle rivalling the alpine meadows of continental Europe.  Coombs Dale has more than its fair share of rare plants and animals, providing some of the best and most accessible sites in the Peak to enjoy them, and one of the best butterfly sites in the county is located just below Sallet Hole mine where 18 butterfly species can be seen in a single day.

Coombs Dale provides access to Stoney Middleton lagoons. A bird watchers paradise home to waders and roosting flocks of gulls, birds reported there include Curlew, Sandpiper, Sanderling, Dunlin, Cuckoo, Temminck, Ringed Plovers, White Wag and Wheatear amongst others. The lagoons are also home to the amazing site of the starling murmurations, said by Tim Birch, Derbyshire Wildlife Trust to be one of the most amazing wildlife spectacles on the planet, a roost of nearly one hundred thousand birds of national significance.

A remarkable story of a remarkable charming village. View more images of Stoney Middleton on Flickr.