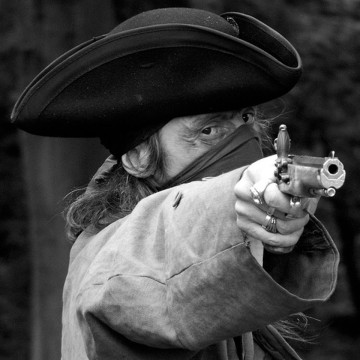 The desolate moorland crossing from Stoney Middleton to Wardlow offered rich pickings to Black Harry, a highwayman of the 18th century who preyed on the travellers of that time.

Back in the 17th and 18th centuries travellers really did take their lives into their own hands trying to navigate the perilous Derbyshire Peak which was like the Wild West. Highwaymen ruled the highways and getting lost on the moors, especially during the winter months, or getting held up by a masked horseman were an all too common a story. Maps weren’t available until 1760, and sign posts simply didn’t exist, stone markers were the only way to navigate the Derbyshire Peak, offering some guidance and reassurance for thousands of lost and lonely travellers. Although most travellers were illiterate, they would be able to figure out local place names, although deciphering local dialect would be another challenge entirely.

Highwaymen were common on the Peak’s roads, the very name highwayman conjures up a romantic image of a bygone age where men like Dick Turpin held up stage coaches and robbed their rich passengers. The origins of modern highwaymen have their roots in the English Civil War. The word highwayman came into the English language in 1617, although examples of highway robbers date back to medieval and Elizabethan times. Highwaymen had an average life expectancy of 28, most died by hanging and then their bodies were displayed in gibbets at crossroads as a warning to other law breakers.

Many of the routes of this area converge on the junction of Black Harry Gate. The old gate is still there although Black Harry Farm was demolished to make way for mining activities. Nearby is Black Harry Lane, one of a series of packhorse ways used from the early Middle- Ages until the mid nineteenth century to transport goods across the Peak District. According to Peachland Roads and Trackways (AE & EM Dodd), the merchants whose goods were delivered by packhorse generally collected payment in person. These men were prized prey, riding home with their golden guineas along bridle-ways and through fields where frequent gibbets warned him of his perils.

The law and highwaymen

Highwaymen caught in the Peak in the 18th and 19th centuries could expect to end up dangling from a rope outside Derby gaol. In 1722 a law imposed the death penalty for being armed and disguised (i.e. face blackened) in high roads, open heaths, etc., but drawing and quartering was only added to hanging on conviction of treason, not for other crimes. Gibbeting the corpse took place up to the mid- nineteenth century, and the gibbet was to be erected on an open space nearest to the crime.

Black Harry had a very busy career until it was cut short after he was apprehended at Wardlow Cop by the Castleton Bow Street Runners under the command of Blue John,(Bow Street Runners being London’s first police force). Following which he was hung, drawn and quartered and his remains displayed in a gibbet at Wardlow Mires. It is said that Derbyshire vultures from Ravensdale picked his bones clean.

The Bow Street Runners have been called London’s first professional police force. The force was founded in 1749 by the author Henry Fielding and originally numbered just six. Bow Street Runners was the public’s nickname for these officers, although the officers never referred to themselves as runners, considering the term to be derogatory.

Similar to the unofficial ‘thief-takers’ (men who would solve petty crime for a fee), they represented a formalisation and regularisation of existing policing methods. What made them different from the thief-takers was their formal attachment to the Bow Street magistrates’ office, and that they were paid by the magistrate with funds from central government. They worked out of Fielding’s office and court at No. 4 Bow Street, and did not patrol but served writs and arrested offenders on the authority of the magistrates, travelling nationwide to apprehend criminals. In charge was Saunders Welch, an energetic former grocer elected High Constable of Holborn, who selected his men from former constables, discharged at the end of their year in office, who were prepared to receive legal training and carry on the work.

When Henry Fielding died in 1754, he was succeeded as Chief Magistrate by his brother John Fielding, who had previously been his assistant for four years. Known as the Blind Beak of Bow Street, John Fielding refined the patrol into the first truly effective police force for the capital, later adding officers mounted on horseback.

Although the force was only funded intermittently in the years that followed, it did serve as the guiding principle for the way policing was to develop over the next eighty years: Bow Street was a manifestation of the move towards increasing professionalisation and state control of street life, beginning in London.