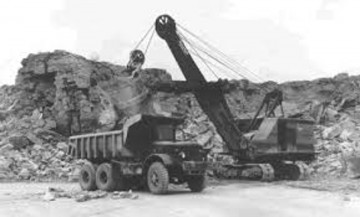 Limestone has been quarried in Stoney Middleton dale for centuries, a principle industry and employer during the last century. Thousands of tons of rock have been removed to produce vital minerals and metals and to simply provide stone for construction.The village had many quarries along The Dale, spreading from Darlton quarry (opposite Lovers Leap Garage) to Furness Quarry (now known as Horseshoe quarry) half a mile past the turning for Eyam.

The Peak District of Derbyshire is at the southern end of the Pennine ‘backbone’ of hills which runs up through northern England. The Peak is made up of a limestone upland plateau known as the High Peak and the lower valleys known as the White Peak and home to Stoney Middleton. This carboniferous limestone was deposited over 300 million years ago, an accumulation of millions of tiny creatures collecting on the bed of what was a tropical sea.

History of the limestone quarrying

Limestone was first quarried in Derbyshire in Roman times, for building stone and to produce lime and lead. It continued through the ages until recent times. The stone was used for interiors in numerous important buildings including, Chatsworth House, Windsor Castle, Houses of Parliament, the Bank of England and many cathedrals.

Early methods of quarrying were very primitive and dependent upon manpower to split and break up the rocks with little mechanisation beyond a horse and cart.

The Limestone Industry comes of age with the Industrial revolution

The use of gunpowder in blasting at the beginning of the 19th century established limestone quarrying and significantly increased production. The stone was used for burning to produce quicklime, a soil improver used by farmers and for the newer industries that developed with industrial revolution. Limestone was crushed and used for road surfaces and in the production of asphalt macadam. By the early 20th century large volumes of limestone were used as a flux in blast furnaces for smelting iron and in the large-scale manufacture of glass.

The development of ground calcium carbonates for modern uses

The latter part of the twentieth century has seen major changes to the extraction of limestone, and the manufacturing and finishing capabilities of the industry enabling a new generation of finely ground products to be produced. Uses of Ground calcium carbonates (often called GCC) range from animal and pet feeds, ceramic tile adhesives and concrete to plasters and textured finishes, carpet-backing, plastics and rubber. Applications that our forbears, even less than a century ago, would have struggled to have imagined.

Since the 17th century, the Peak District has been Britain’s largest lime and limestone producer. The rich deposits of carboniferous limestone have provided – and are still providing – vast quantities of raw materials for use in industry.

Limestone (Calcium Carbonate) is very important in ways few would imagine and is evident in our everyday lives. Most common household products contain the material in one form or another, from toothpaste and pills to adhesives for construction, holding up the tiles on our walls. Tiles on the roof, carpets on the floor, glass in the windows and jars in the cupboard are all dependant on limestone.

Calcium carbonate is added to the land and into animal feeds and finds its way through the food chain to the bones in our bodies. It is an essential neutraliser, balancing acidity and improving drainage and aeration to increase crop yields.