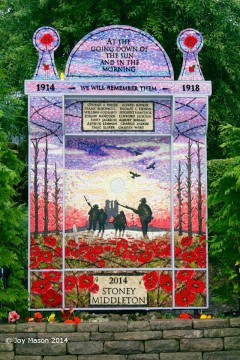 Stoney Middleton Well Dressings date back to 1936  (Jubilee year) started by Ted and Oliver Shimwell and continuing ever since. It is a Christian expression originating from an ancient thanksgiving for abundant water. Three wells are dressed – two in The Nook, one of which is drawn and petalled by local children and one near the Bathhouse.

The custom of Well Dressing in Derbyshire is a Christian expression of an ancient thanksgiving for abundant water. It takes the form of pictures made up of flowers, petals, seeds, leaves, moss, bark and other natural products set in clay. A service of praise and prayer and the asking of God’s blessing on the Wells form the focus of all that goes on. Donations made and profits from sales are used to support five local causes – St Martin’s Church, the Wesleyan Reform Chapel, Stoney Middleton School, the British Legion and SMILE (Stoney Middleton Interest and Leisure Enterprise).

Well Dressing now is very different from 50 years ago. Three wells are dressed – two in The Nook and one near the Roman Baths. Local people design the pictures and interpret a religious or a worldwide theme. The children draw a picture and petal it themselves.

Maypoling is now danced to a tape and everyone has a turn afterwards. The Well Dressing Shop held in a local garage has been a huge success and sells lots of interesting items for all ages. The WI does teas in the church grounds for everyone, and SMILE has a stall. There is also a barbecue so you never need be hungry.

The Nook is always full of people and it is really lovely to feel and see the community spirit spreading itself and making everyone feel welcome. Families and friends from long past meet up and reminisce just like they did when there was Wakes Week.

Dressing the Wells in Stoney Middleton

Well Dressing is not just a matter of collecting a few flowers and sticking them into clay. Weeks of dedicated work is required and some of these jobs have been performed by the same families for years, while at the same time many in-comers have been introduced to the numerous tasks. In 2001 48% of the village took part in the Well Dressing festivities.

The care and attention needed to produce a good strong framework for the well picture to be fixed to has been the task for G & D Mason – local joiners in the village. They have religiously made, inspected and repaired the frames since Well Dressing was introduced in 1935.

The frames vary in size and structure with added dollies to complete the picture. In total there are eight frames to complete the three wells. Each piece has to be painted every year so that the chairman of Well Dressing Committee could be mistaken for a painter and decorator.

The clay used for puddling occurs where limestone meets gritstone so that local supplies are readily available. After extraction, hard clay is stored in sacks for a year. The clay is soaked in water butts for a few weeks and given an occasional stir to aid water penetration. Puddling involves working the now softer material by hand to remove stones and other debris and to produce a creamy plaster-like final product.

The puddled clay is applied to the picture boards several days before the design is traced onto the fine surface and petalling begins. Preparing up to five hundredweight of clay in this manner is heavy, time consuming, dirty and thirsty work. Correct choice of the work site is vital to encourage volunteers. The site must be within tray carrying distance of the local hostelry – we have the ideal site – The Moon Inn yard so we reckon our clay is the best in the area and in a normal summer the pictures stay bright for the full week.

The main picture in the Nook always has a religious theme. The wells in the gardens next to the Roman Baths and the Children’s Well can be religious or secular. Ideas come from a biblical text or a specific incident. Source ideas have been taken from Bede’s Ecclesiastical History, the Book of Kells and Celtic motives. Preliminary sketches are made, discarded or reworked until a satisfactory idea emerges which achieves the desired balance, rhythm and impact. The colour and theme of the picture often determine the style and colours of the frame surround. A scaled down colour design of the whole board is then created.

This gives the petallers a colour reference point, although colours may change depending on availability of certain flowers each season. Next the designer takes over the house and litters every available floor and space to produce a full-scale line drawing from the squared-up original design. Doubts creep in!! Will the picture work? Is that arm too long? Should that cloth fold like that? Shall I go on holiday tomorrow? But a week before the Well Dressing, you lay the paper on to the clay and transfer the designs by following the pencil lines with a dressmaker’s wheel. Wooling can now begin.

Collecting Flowers and Other Materials

The job of collecting petals and other materials such as moss, bark and alder cones falls to a small band of dedicated helpers who scour the countryside, gardens and supermarkets!!! in their efforts to secure materials of the right texture and colour to allow the designers’ pictures to become a reality.

We start collecting dry materials several weeks before but the actual flowers must be picked during the three days of petalling. This means endless trips to local gardens but also going further afield for hydrangeas – essential for the sky – driving hundreds of miles and braving barking dogs, thistles, nettles and brambles to satisfy the petallers. Most people give willingly but some need friendly persuasion to part with prize blooms.

When the design has been traced on to the clay the petallers begin their work by outlining the picture by pressing wool into the clay with a cocktail stick. The background is then gradually filled in with long lasting natural materials such as mosses, bark, crushed stones, alder-cones and statice.

The petals of the flowers that have longer lasting qualities such as marigolds and hydrangeas are put in first with red carnations last. Each individual petal is fixed into the clay by pressure with a small peg or cocktail stick at the base of the petal. Working from the bottom of the picture upwards the petals are placed pointing downwards so as to overlap the row below. This ensures that the rain runs off down the picture and doesn’t disturb the petals. Constant spraying with water is necessary to keep the clay moist.

Then we all wait with baited breath as the frame is fixed in position hoping nothing will fall off and if we are lucky and have had plenty of helpers we just make the pub before closing time!!

The above description has been taken from “Stoney Middleton – A Working Village” published in 2001. There have been a number of changes and the up to date story is avaiable on the Stoney Middleton Well Dressing website.

Filmed throughout the various stages, the film will provide a unique insight into the a typical well dressing event. Click on the link below and remember to watch in full screen by clicking on the full screen icon in the bottom right hand corner of the video.