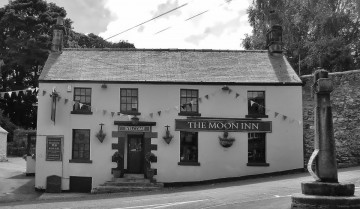 The Moon Inn is the last remaining public house in the village of Stoney Middleton. It was home to the brutal murder of a Scottish pedlar during the eighteenth century. The landlord turned a blind eye whilst his murderers took his body away throwing it down nearby Calswalk cavern, where it lay undiscovered for 20years, and according to the locals both the cavern and the pub remain haunted to this day.

In, or thereabout 1743 a Scotch pedlar was in the habit of visiting Eyam Wakes to sell trinkets, sham jewellery, clothing and other articles. Upon one such occasion he is said to have reported several rivals whom he suspected of selling similar wares without proper authority. When challenged by the village constable, the pedlars could not produce licences and were therefore disqualified from doing any further business. The men were so incensed by the Scotsman’s interference that they swore to be avenged, and

shadowed him from Eyam to Stoney Middleton. But the landlord of the Bull’s Head, at Eyam (now closed), had become acquainted with their intentions, and, knowing them to be men of reckless character, had sent his man to act as bodyguard for the Scotsman until he reached the Moon Inn, at Stoney Middleton. The original Moon Inn was situated across the road from the present day pub which after being converted into houses, was pulled down. The sign of the demolished building was subsequently adopted by the present day Moon Inn, near the village cross. While at the Moon Inn, the competitors of the Scotsman assumed a more friendly attitude and persuaded him to join with them in a game of cards. While they were playing, however, they found opportunity to provoke a quarrel during which the pedlar was brutally murdered.

In an attempt to conceal their foul act, the men laid the corpse across a horse and secretly conveyed it to Carlswark Cavern where it was left propped in a sitting posture within the cave. Two miners are said to have witnessed the journey to the cavern, but their account was so incoherent and confused that it was dismissed by neighbours as just another attack of delirium tremens⁶. The landlord of the Moon Inn also knew about the crime, but was never accused of complicity with the guilty men. Yet, ever afterwards, he was a man of sealed lips; a man with a furtive and unhappy secret; and when he lay upon his death-bed his conscience troubled him to such an extent that he could not die at the inn, and asked to be removed to a nearby house where he spent his last hours.

Carlswark a cavern not far from the village of Stoney Middleton, once had an entrance almost as impressive as that of the Peak Cavern at Castleton, and according to A Peakland Portfolio:

Elderly people still recall how carters² used the archway as a shelter for their wagons at night. Tramps, too, were in the habit of using the cavern as a dormitory, although in winter they found it warmer to doss down at the edge of a lime-kiln. But this was a dangerous practice, and several have been suffocated by fumes rising from the kilns when the wind has changed during the night. There have also been instances of sleepers rolling over the edge to be cremated in the burning lime.

A generation ago Carlswark Cavern was considered a place of evil repute; a place haunted by the ghost of a Scotch pedlar; so the rural authorities decided to use it as a tip for the disposal of public refuse, and soon the gaping mouth of the cavern was choked with ashes, tins, bottles, broken earthenware, and scraps of rusty iron. But later on the caves in Middleton Dale began to attract the attention of students interested in the then new sciences of speleology³ and hydrology, and would-be explorers dug down until they had uncovered a space just large enough for a person to wriggle into the interior of the cavern. And thus access was regained to an extensive series of caves-including the Wonders Chamber-which had been sealed up for a number of years. The cavern once sheltered a grim secret. It was the scene of a gruesome discovery which led to the exposure of a crime that had been buried for twenty years in this clammy stone sepulchre⁴. The discovery was made by a reluctant explorer who stumbled upon the remains of a murdered man; a man whose clothes were rotting, and whose buckled shoes supplied the only evidence of identification. The incident happened one Saturday in August, when the people of Eyam were preparing to celebrate the annual Wakes. It caused a widespread sensation, and this story has been built up, bit by bit and piece by piece, from scraps of information gleaned from records chronicled at the time, or shortly afterwards …

Discovery of the Corpse

Twenty years elapsed before the crime was discovered, and this is how it happened ….Towards the end of August, Peter, and Betty Mortin were busily preparing their cottage at Eyam for the reception of guests whom they had invited to attend the annual Wakes. That morning Peter had come downstairs with a worried expression, and Betty, upon enquiring the reason, had learned that her husband was distressed by the memory of a dream which had left a vivid impression upon his mind. In his dream Peter had been showing the expected friends around the village, and during the course of their ramble they had explored one of the caves in Middleton Dale. Peter, as leader of the party, had 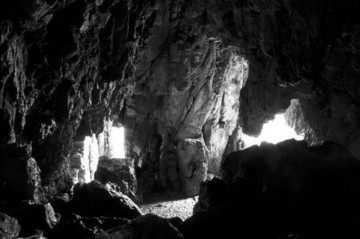 found a skeleton partially clothed arid still wearing shoes adorned with buckles. The shoes were particularly vivid in his memory, and he had a vague feeling that he had personally known the man whose decomposed remains had figured in his dream. The arrival of the expected guests interrupted Peter in the narration of his dream which, in the excitement of greeting relatives and friends, was temporarily forgotten.

The morning of discovery

After the mid-day meal, it was suggested that Peter should take the menfolk for a stroll in the neighbourhood of the village. This proposal was received with general approval, and the party set off to visit various beauty-spots and landmarks, as well as places of interest connected with the plague which had devastated, the village a century before. While walking along Middleton Dale, a member of the party drew attention to the entrance to Carlswark cavern and suggested that they should explore the interior. The rest of the party readily agreed, but Peter hesitated; for the suggestion had awakened a sudden and unpleasant recollection of his dream. Nevertheless he felt unwilling to disappoint his guests, and would have been even less willing to admit the reason for his reluctance to comply with their wishes, lest he should become the victim of their good-humoured banter.

Therefore, after calling at the Ball Inn to obtain a supply of candles, the party entered the cave and darkness closed in upon them; a darkness relieved only by the flickering light of the candle. With Peter leading the way, they cautiously proceeded to grope along the limestone passage, and only the hollow sound of feet shuffling among the loose stones and the monotonous drip of water broke the eerie silence. No doubt there would also be an occasional muffled thud, accompanied by a sudden exclamation of pain, as one of their heads unexpectedly came into contact With the low roof.

Peter was already inwardly regretting his folly at allowing himself to be persuaded into such a venture, and probably other members of the party were repenting of their eagerness in persuading him. Suddenly Peter halted with a gasp of horror, the candle slipping from his nerveless fingers to be extinguished upon the cavern floor, for there at the end of the passage he was confronted with a skeleton partly covered with shreds of clothing and still wearing shoes; shoes adorned with buckles corresponding to those he had seen in his dream! One glance was sufficient to send the terrified men stumbling through the darkness until they rushed, white-faced, trembling and breathless into the welcome light and warmth of day. Their curiosity had been cured!

Recovery of the corpse

After the discovery had been reported to the authorities, the news spread rapidly through the district, and next day a crowd of sightseers watched while the remains were

brought out of the cave. The skeleton was positively identified as that of the Scotch pedlar, chiefly by the buckles upon his shoes, for they were a well-remembered feature of his dress. The shoes were later deposited, together with the bones and fragments of clothing, in a large box which stood in a corner of the north aisle of Eyam Church. As the authorities were unsuccessful in tracing any relatives of the dead man, it was decided to bury the remains in the churchyard, but not before the shoes had been adopted by a certain Matthew Hall, an Eyam bell-ringer, who was so little troubled with superstition that he did not scruple to wear the shoes until they were no longer serviceable and had to be thrown away.

The criminals were never proved guilty of their crime, but a great deal of suspicion attached to them after the remains had been recovered from the cave. A Peakland Portfolio tells us:

People remembered the dispute at Eyam Wakes. The landlord of the Bull’s Head recalled how he had sent his man to protect the pedlar from molestation between Eyam and Stoney Middleton. And the landlord of the Moon Inn had a sinister secret which he dare not share with his patrons, lest he too should become a victim of the unscrupulous men who lived only five miles away at Tideswell. The latter, although they evaded the law courts, the condemned cell, and the gallows, are each said to have suffered some form of retribution during their life-time. Among them was a woman whose face was terribly mutilated by a cancer. Sinister stories were told about the Carlswark for many years after the discovery of the crime, and people who were obliged to pass that way in the dark seldom did so alone. For the cavern had the reputation of being haunted by the ghost of the Scottish pedlar, and it is on record that horses often shied when passing the entrance.

Today we remember the story which 100 years ago was almost for gotten A Peakland Portfolio stated:

But nowadays the story is almost forgotten, and the present generation refuses to acknowledge the sovereignty of this Gaelic ghost. And the speleologist³- with his clay-stiffened garments, coils of thick rope, and mining helmet from which a cyclopean electric lamp shines in the darkness-speaks a new language which belongs to an underworld few people ever see. An underworld of curtains, cascades, bee-hives, stalactites and stalagmites made of fairy gold. And the speleologist is more concerned with curtains, syphons, pitches, avens and shakeholes, than he is with the murders and ghosts of a dead generation. And perhaps one day his pick and spade will turn up the bones, not of a murdered peddler, but of prehistoric men and mammals. Homo sapiens⁷ …… rangifer tarandus⁸ ….. ursus spaeleus⁹ ….. cervus elephus¹⁰ ….. bos longifrons¹¹ ….. equus caballus¹²

³ The scientific study of caves

⁶ Latin for “shaking frenzy”, also referred to as The DTs, “the horrors”, “the bottleache”, “quart

¹⁰ Red deer – one of the largest deer species