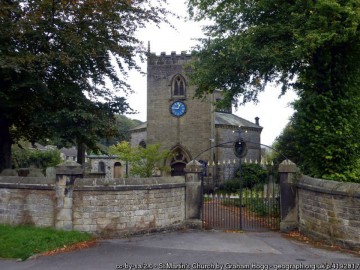 St. Martin’s church was built by Joan Eyre in the 15th Century in thanksgiving for the safe return of her husband from Agincourt (1415). It is a very unusual and beautiful building. The octagonal nave (the oldest of only two in Britain) is very interesting as all the pews face the centre of the church focusing the attention of visitors to the middle of the church, rather than the front, creating an intimate feeling, unique to this style of church (see picture of ceiling above). The church as we see it now was built in 1759 on the spot where the previous, more traditionally shaped church stood, having been destroyed by fire in 1759.

Graham Armitage tells us more in an extract from his forthcoming book about Stoney Middleton:

To begin with the church, it is located in The Nook just off the main A623 and is of a highly unusual octagonal design-the only other like it in the entire nation being  located in Teignmouth, South Devon.

To help us trace a full history back through the ages we are again indebted to Thomas Cowen who tells us that:

As will be clear from the section on the Bath House there is very considerable debate as to whether the Romans ever actually built a formal Bath House as such in or around the village springs (the present building is of a much later date) which at very least makes this piece of information less than fully enlightening.

Given the on-going growth of Christianity during those times some form of small place of worship probably existed but it is doubtful whether it will ever be possible to be more precise on this point. However matters become much clearer from 1415 when the husband of a noted local lady, Joan Eyre, returned safely from involvement in no less an event than the battle of Agincourt. (Yet another example of a villager being present and no doubt making a vital contribution when questions of critical historical importance were being resolved).

As thanksgiving to God for the safe return of her loved one Mrs.Eyre ordered that a church be erected in the village and it was named St.Martin’s Church-St.Martin been the Patron Saint of Cripples. Of this original building only a square tower now remains although excavations in the churchyard tend to indicate strongly that it was of standard construction for it’s time. The tower itself contains three bells (it is rumoured that there was a fourth which was taken to the mother church at Hathersage) which bear inscriptions as follows:-

The King’s Book of 1533 gives the living of the church at £2 6s 8d per annum-inflation pushing this up to a massive £45 p.a.by the time a Mr.Thorpe was curate in 1650;by 1910 when Mr.Cowen was writing matters were getting seriously out of hand with the equivalent figure now standing at £210.

It is also known that in 1692 a gentleman named Thomas Whyte left a will bequeathing his great Silver Cup to be used in the Church or Chapel of Stoney Middleton aforesaid forever in the administration for the most Comfortable Sacrament of the Lord’s Supper or Holy Communion.

Apart from these snippets, information about the church is thin on the ground until the 18th century when things start to become clearer.

1715 saw the introduction of a parish register for the first time and it became a little more straightforward to know who did what. For example a register entry for April 16th 1717 lists the names of the singers who were equally concerned in the charge of building the loft in the Middleton church for their own use.

In 1743 the parish of Stoney Middleton officially came into existence (issues of what it was before are discussed elsewhere, as are vexed questions such as which is Stoney Middleton and which is Eyam and where the boundary has been drawn over the years). However in 1759 a major turning point in village history took place when a fire broke out in the church which eventually left only the tower standing. This led to a major rebuilding project and the erection of the present octagonal structure in 1767. This has come to be recognised as a principal feature of the village and it would not be an exaggeration to describe it as a tourist attraction. There is some irony therefore in the fact that at the time it by no means garnered universal approval. The architect had previously carried out only civil constructions such as stables and an eminent historian at the time, a Doctor Cox, commented: We wish he had confined his attention exclusively to secular work. He also described the juxtaposition between the traditional tower and the ground-breaking design of what was now the main body of the church as incongruous.

Many years later there were clearly some who still held to this assessment as Tom Carter recalls over-hearing a school-master, who was obviously overseeing a school trip, telling his pupils:

Now, boys, look, this is said to be the ugliest church in England

Well, that is, I suppose, what you tend to get as a reaction if you try anything different, but subsequent generations of village residents and visitors have clearly begged to differ with the eminent gentleman and the passing schoolmaster. Certainly the new design seemed to be popular enough locally, and in 1897 the Vicar of Baslow presented the village with the tower clock which is still there to this day; mostly, over a hundred years on, it continues to function well and keep excellent time-and when it does occasionally come to a stop our neighbour Graham Pass is immediately called into action and gets the hands moving again.

The church Harmonium arrived shortly afterwards in 1903, built by a Mr.Cousins of Lincoln and purchased from him at a cost of £130. A further addition in 1905 was a stained glass east window on the theme of The Good Shepherd made possible via public subscription. Another interesting feature is part of an ancient stone font apparently originally located in the church itself but moved in 1861 to a corner of the churchyard under the shade of a number of trees. One of the main features of all churches is the provision of a churchyard in which those who have shuffled off the mortal coil can rest.

Stoney Middleton’s current cemetery is not in fact located in the churchyard, which according to Thomas Cowen was closed to internments in 1878 but can be easily found by proceeding past the church, turning right (there is nowhere else you can go anyway) and then carrying on to the end of the road, with the Bath House on your left. Turning left again up the hill will bring you immediately to a burial place which is well maintained and, as such places often are, very restful and calming. Thomas Cowen again tells us that the Lych Gate to this cemetery was consecrated in 1878 and the ground drained by public subscription in 1908. An entry in Kelly’s Directory from 1881 confirms that the Bishop of Lichfield consecrated the cemetery in 1878. This creates some confusion as to when the new cemetery actually came into usage-was this in 1878 or 1908? In fact a visit to the current cemetery reveals headstones going back not only before 1908 but actually prior to 1878, the alleged closure date of the churchyard  burial ground. In fact the earliest date I have been able to find in the current cemetery goes back as far as 1865. This is in fact a family tomb and reveals a profoundly sad story.

The earliest internment is a John William Chapman, the son of Richard and Mary Chapman, who is recorded as having been born in February 1865 and dying in July 1865. To compound the tragedy it appears that in 1871 the couple also lost their eight year old adopted daughter Emma Masom. From a detached perspective over a hundred years later it is easy enough to observe that early infant mortality was all too common in those days but this would have been of little consolation to Richard and Mary at the time. In the meantime if we return to the original churchyard we find graves going back as far as….and the most recent gravestone as having been erected in 1882. In other words it would seem that the current cemetery must have in fact come into

usage not only long before 1908 but prior to the official closing date of the church cemetery. Equally, however, it would seem that the 1878 closure date for the churchyard itself was not an absolute cut-off although there were obviously very few burials after that date.

Two more observations stand out from my cemetery explorations (a curiously calming process, strangely); one is simply that a question mark must exist about the nature of any of the dates I have given as definitive cut-off points due to the fact that in both plots quite a few gravestones have become either overgrown or simply eroded by time and the elements; the second (notwithstanding the tragic experience of the Chapman family) is the remarkably high numbers of people buried in both locations who reached ripe old ages, living into their eighties and nineties. Clearly there must be something in the air, water or both in Stoney Middleton.

Thomas Cowen also provides us with a list of some of the names who have held the position of Curate, Minister or Incumbent at the church. These are as follows:-

To this invaluable list-without Mr.Cowen what are the chances of knowing who was Curate at Stoney Middleton in the time of Elizabeth 1?-more contemporary records can add:-

Of these individuals the name that seems to have passed most significantly into village history is that of the Reverend Urban Smith. In Cobbler’s Patches Tom describes him as

A typical Victorian clergyman, rather short in stature, a roundish figure, white whiskers, rather slow in speech, had a walking stick and a short legged brownish dog called Rock, for which he had a very penetrating brass whistle

The Reverend was apparently fond of taking snuff and had a daughter usually referred to as Miss Marion who acted as an unofficial Lending Library for the village, obtaining then popular magazines such as Sunday At Home and Leisure Hour at a time when reading material was scarce. He also had sons –the youngest of which, George, once blew out a kitchen window in the vicarage whilst conducting a chemistry experiment. Another son was called Godfrey-a fact known to us because Tom ends his section on the church by telling us that he has just been handed a piece of paper, apparently obtained by a relative of his when she was a servant at the vicarage, which simply reads:

At the time Tom wrote this the paper was already 100 years old-it is poignant to consider that a further fifty years have since passed and that Tom’s book is now itself an historical item. On the vexed matter of Church v Chapel Urban Smith does not appear to have been a great one for harmony-viewing the Chapel as a nuisance according to Tom. Nonetheless he was vicar in Stoney Middleton for over fifty years and appears as a person of significance in Thomas Cowen’s work.

The successor to Reverend Urban Smith, J.B.Riddlesden, was apparently more inclined towards inter-faith harmony and invited Tom Carter to give the address on Armistice Day. Reverend Riddlesden also distinguished himself by his support for striking workers during the dispute in the Boot and Shoe industry in 1926.