The Coombs Dale nature trails highlight this superb limestone valley on the very edge of the carboniferous limestone massif. Despite being one of the least known dales in the Peak District; it is situated at the Eastern edge of the village (only a few hundred yards from Calver crossroads). Access to the dale is via a well-concealed entrance just off the busy A623 at the side of the Stoney Middleton sports pitch.

Coombs Dale coverers an area of more than 230 acres. It is an area of special scientific interest and importance for its conservation. It includes a wide range of wildlife habitats which are of national importance, highly characteristic of the carboniferous limestone. This spectacular secluded dale has been spared the ravages of modern agriculture other than for grazing and as such has become home to many threatened species. It stands as an important reminder of ancient landscapes which have sadly been lost in so many areas of Britain. It is home to important grasslands which in turn support a myriad of amazing and attractive wildflowers. These in turn provide home and food for a wide range of invertebrates, specifically butterflies and moths which can be found in abundance.

What to see on the Coombs Dale Nature Trails

The dale entrance is partially concealed by dense Ash woodland which proliferates despite the steep slopes and limestone outcrops. Ash trees can live to a grand old age of 400 years and reach a height of 35m. They are graceful trees growing together forming a joined canopy supporting rich undergrowth, particularly important for wildlife, whilst Springtime brings a spectacle of flowers which are a delight to see.

The outcrops of limestone rock provide habitats for plants of particular interest, most prolific on the South facing slopes where soils are especially thin and shallow. They grow precariously on the very edge of the cliffs providing a spring spectacle. Known as winter annuals for their habit of growing over the winter to provide there flowers in spring they avoid the summer when moister in the thin soil would less likely. Plants cultivated in gardens all over the country known as Alpines tumble over the limestone terraces in colourful blankets including Rockroses, Thymes, Stonecrop and ferns.

The woodland, grassland and rock plants come together in places and combine to create an outstanding floral spectacle rivalled only in the alpine meadows of continental Europe, while on the upper margins of the dale, you can see vegetation more usually associated with the Dark Peak where heather, bilberry, mountain vetch and wavy hair grass dominate the vegetation. 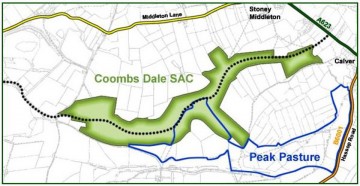 Coombs Dale offers easy access to an area rich in unusual and rare plants and animals, it is one of the best sites in the Peak Park to visit and enjoy them. Rare plants include the orchid dark red helleborine, fingered sedge, mountain melick, woolly-headed thistle and leadwort, limestone fern, lily of the valley.

The area is particularly renown for the array of orchids, the commonest being the Early Purple Orchid which can flower in such abundance it forms a sea of colour.

is a hardy orchid having small rosettes of leaves in autumn that continue to grow through the winter. It flowers from April to July with an appearance similar to a bee

are one of the UK’s rarest plants arguably, one of the most extraordinary families is the orchids. Often mimicking other wildlife – bees, flies, butterflies, frogs, and even monkeys and men, the orchids have incredible flowers that have often evolved to attract unsuspecting insects to come and play.

a national rare and rapidly declining plant featured in the Red Data Book of highly vulnerable species. It is an evergreen perennial forming a mat of green foliage, with clusters of cerise, deep crimson, pink or white flowers 18mm wide on stalks to 20cm tall

is a scarcer species of thistle that can be found on chalk and limestone scrub and grassland; sometimes it can also be found on more disturbed ground such as quarries. Its cottony flower heads are distinctively round and appear from July to September. As with the other thistles, it is attractive to a wide range of insects. The globular, woolly flower heads of the Woolly Thistle are unmistakeable. The flower head comprises reddish-purple florets (tiny flowers) on top of spiny bracts (leaf-like structures) which are covered in white wool. The stems don’t have wings and

Coombs Dale offers a home to one of the best butterfly site in the country especially around the Sallet Hole Mine area. The Dark Green Fritillary is the most popular and is a pleasure to see as it flies powerfully over grassland habitats, frequently stopping to nectar on Thistles and Knapweed. It gets its name from the green hue found on the underside of the hindwings, which are peppered with large silver spots