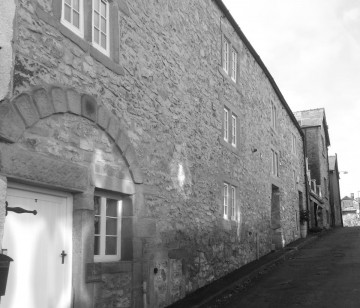 Many villages had a malt house to supply the needs of local publicans, none more important than the malt house in Stoney Middleton. The village had 12 public houses at one time or another and would have needed significant quantities of malt to keep the beer pumps working.

In the eighteenth century local publicans and brewers were in need of malt to brew their beer and many villages had their own. Malt houses were typically long, low buildings, no more than two storeys high, and would predominantly work in the winter to avoid higher temperatures which hindered the germination of the barley, and as such they provided work for agricultural workers who would otherwise be short of work in the winter months.

Malt houses declined during the nineteenth century as small breweries started to disappear. Larger breweries developed their malt houses as a result of improved techniques allowing year round malting. Carefully controlled temperatures dispensed with the need for large malting floors, but required high power consumption so some large malting floors did continue to operate well into the twentieth century.

The grain was first placed in to a large shallow vessel and was soaked for a day or so during which time the grain would swell and increase in bulk. The grain was then transferred to another vessel made with wooden boards, it was piled high where it began to germinate, it would be left for two days or so depending upon the malters own preference. It was then spread out on the floor where it would begin to grow providing an agreeable aroma. The grain was turned at intervals during the following 14 days to achieve an even growth and would be spread thinner and thinner as the growing process proceeded. The process was halted before the husks burst as most of the starch in the grain had ben converted to maltose. Finally the grain was left to dry.

The barley was then moved into the kiln for a few days, depending on whether a light or dark malt was required. A slow fire was used to start, and then gradually raised to suit the purpose of the malt and the desired colour. The barley was then sieved and stored for a few months to develop flavour.