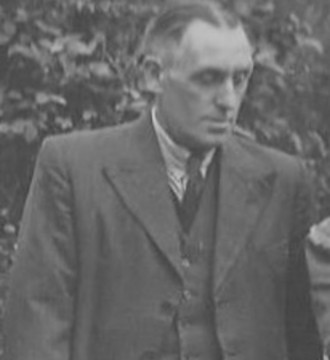 He was a very kind man, he would help anyone, and everyone liked “peter hall”. He kept pigs in the war, then after they were killed he would give the meat away, a piece of pork or some good old black pudding to his friends. He worked for a local quarry owner, firstly at Farnsley lane¹ which is now (2015) British Fluor Spar industries, washing and cleaning fluorspar to get all the dirt out before it was ground to powder at Rock Mill. Later he came to work at the stone quarry in Middleton Dale where the lime kilns were, near to that was Eyam quarries which made tarmac for roads.

My dad started his day by going to Eyam, to the house of his boss to get “Dobbin” the horse that worked in the quarry. He was a beautiful shire horse, silver grey in colour, he had lovely feathers around his legs (these started half way up his legs and when he walked they flowed like feathers!). He always had brasses on his collar and his bridal, he would look magnificent, a powerful horse! They would come from Eyam on Tideswell Lane, and down the “streaks” (name of the path)², which came out at the opening to the quarries at Middleton Dale. Once at the quarry my dad would harness Dobbin up to the cart. He would take the stone from the quarry to the lime kiln which had to be filled with the stone.

At the end of the day the kiln was lit to burn all night to turn it to lime, which later went to the steel works in Sheffield. This work was very hard as the stone for the kiln had to be broken down and loaded onto the cart by hand, then taken to the kiln, the stone had to be placed the right way in the kiln as it was layered with coal. They had to put as much stone in as possible so that the kiln was full, and this would be one day’s work. 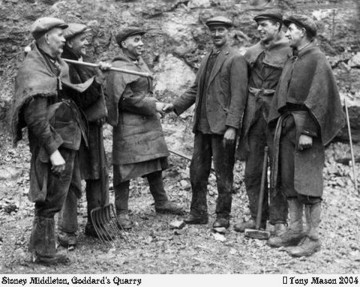 This kind of work was very hard on the hands and my dad would come home with cuts and blisters all over his hands from breaking stones, loading the cart, using the hammer and burns from the hot kilns. You kept from his hands and clothing as they would burn your skin. There were no gloves or any protection for the men doing this job, my poor dad would put Vaseline all over his hands at night, he must have been in pain but he never said a word. Doing this work their hands never healed. I am thinking of him as I write this and I feel his pain! After his day in the quarry he would take Dobbin back to his stable, brush him down, feed and water him, then come home. A long day which started at 7am and finished at 5.30pm.

Leaving work the men would just drop their tools anywhere never giving a thought to rats! At night the rats would run all over there tools and urinate on them, by morning everything was dry. The men never thought about rats, just picked up their tools and started another day’s work. With my dad’s badly cut hands and open wounds they were an unseen death trap! In 1947 my dad was taken ill and for many weeks no- one knew what was wrong, 6 weeks later he had died, an awful death.

Only after his death did they find out what he died of, he had been poisoned by the urine from the rats running over his tools. It had got into his bloodstream through the cuts on his hands, no- one at work would admit there were rats, If only the bosses had cared and supplied them just with gloves for working in such conditions, not a thought for the working man. No- one would do this job today without protective clothing.

I was 15 when I lost my best friend, I am now in my eighties but it still hurts me to think of the way he died. Many years later Dr Evans our doctor from Baslow told me it was the only case of its kind he had ever had in all the years he had been practising, it is called “viels disease”. Even today one should always be careful of rats, they carry disease and you do not know where they have been. Written by his daughter who will never forget – Lois Bekeris