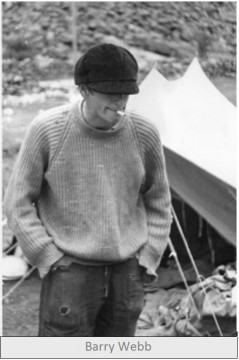 In the early sixties, too late to get into the West guidebook, Barry Webb ventured on to Stoney accompanied by a SUMC member, Charlie Curtis. What came from this were the three very fine routes of Mortuary Steps, Brown Corner and Compositae Groove.The West guide though imprinted 1961 did not, as I recall, get on sale until the early 1962 which may explain the overlap by this mini one published in the 1961-62 SUMC Journal by Barry Webb.

Part of this guide is published here where Webb concludes:

The routes mentioned are the main ones and the best. A competent VS leader with a competent second should find Stoney very pleasant. The climbs are long by local standards up to about 200ft as in the case of Aurora and the rock is akin to volcanics as regards holds.

‘Having climbed around Sheffield for the last six years, I found I was getting mildly bored with gritstone (all the routes I’ve done are not too hard).
The climbing here was mainly opened up by Johnson, who it seems, climbed mostly on limestone and who has donated to it a grading system of its own. I have taken the liberty of changing the gradings of routes to bring them into line with the rest of the climbing world.’

He then goes on to describe the routes there that he knew of with some interesting vagaries or variations on today’s nomenclatures:

A Piton Route is Scoop Wall, The Arete VS with 1 peg by then is Windhover, The Roof is Kink, A Piton Route [again] is Tower of Babel, Spon (MVS) is The Golden Gate and Colly Tower (VS) Pearly Gates, Pology Wall became Padme [see description below], A Short Fatuous Piton Route is probably Om. Then we have on the Triglyph Right-Hand, Central and Left-Hand Cracks which of course are Morning Crack, What the Hell and How the Hell, the latter two being graded VS. His own route descriptions are:

Pology Wall [Padme] 80ft HVS
Start 20ft left of the large corner to the left of Minestrone by a small hawthorn bush. Trend right up a stepped glacis up and right to where a thin crack leads, after 2 pegs, [for aid] to free climbing and another rightwards slanting groove. This is taken to a conspicuous roof overhang, pull over and off to the left.
Barry Webb, Nev Crowther and Mike Wild 10th May 1961

Compositae Grooves 130ft VS
The amphitheatre right of Aurora and left of the massive cliff by the roadside contains two definite buttresses rising from rather chossy lower walls. The left hand one is narrow and ends in a pinnacle. The right-hand one is broader with large frontal overhangs . Up its right hand side runs a groove capped by a triangular overhang and a yew tree. The Groove starts near an ash tree.

His next route was possibly the best by the Webb/Curtis crew, which took ‘several attempts with a lot of careful cleaning up’ according to Curtis. It was repeated by Soper and Webb recalls: ‘I was rather annoyed because the move over the overhang into the groove involved a quite desperate, one handed mantleshelf on a horribly sloping little ledge. Jack declared that it was loose and managed to prise enough of it away to leave a much pleasanter flat hold. I repeated it shortly after to see what he had done and found it a good grade easier.

Mortuary Steps 110ft HVS
Takes the obvious leftward slanting overhanging groove on the nose of the quarried junction of the cliffs facing the Eyam and Middleton Dales [historically known as Shining Cliff] which are at 90°. This is probably one of the hardest routes at Stoney but it is quite solid and only one peg (in place) is used and then only as a runner. Not as hard as it looks and well-protected. First ascent in one run-out.

Finally, Webb mentions what would become Brown Corner and a much better climb than he describes. They wrongly thought that Joe Brown had climbed it first.

Brown’s Groove HVS
The foul groove, looming behind the slag heaps. Very loose and dirty. It is difficult and on the central roof free climbing was impossible due to the nature of the rock (3 pitons for aid). Above, resting was only possible in a layback position. Not recommended.
© Geoff Birtles 2014