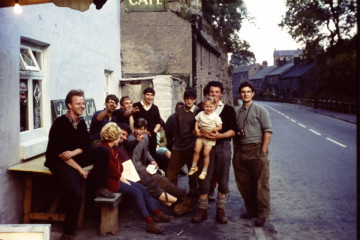 The Cioch Climbing Club was formed by a few climbers who met socially at the YWCA in Sheffield and, in turn, invited others along whom they had met on the crags which formed a Wednesday night gathering. I am told that it was Dave Nowill’s idea to call the new group the Cioch Climbing Club after the Cioch Block on the Isle of Skye which resembled a breast, cioch being the gaelic word for mammary. Thus it was that we jokingly called ourselves a bunch of tits. One of this group, was Jack Street who, along with a few others I had met on Stanage early in 1962.

A few weeks later, on a  chance encounter, Jack and I shared the same bus home from Sheffield town centre where he regaled me about his new found interest in the exciting place of Stoney Middleton to which he invited me which is how I ended up there in September 1962, a 15-year old schoolboy about to set out on an adventure that would last a lifetime.

Years later, when I first watched Monty Python, I was puzzled by the similarity between the barmy sketches on the TV and real life with the Cioch. The daftness of the Cioch was tearfully funny,

bizarre, abstract and downright farce. I was seriously convinced then that whoever had written Python must have hung out at Stoney. On reflection, I suspect that many mid to late teen males who spend time together probably act in much the same way. I’ve never met anybody yet who has not said that National Service was the best two years of their lives. Paul Nunn, in his article ‘Stoney Middleton at the change of life’ in a 1960s Mountain Magazine wrote:

The members of the Cioch were an extremely competitive group, both internally and externally. They subjected unfortunate ‘outsiders’ to a psychological onslaught even more raucous than that of either the local crows or the Sassenach-baiters of Glencoe.

Meanwhile, I got off that bus in the dark, on my own, armed only with the scrap of knowledge that Jack and his mates slept in the caves at the bottom of the crag, and so I wandered up the dale, right under the rocks in pitch darkness and found nobody.  So, I went back down to the village and found them in The Moon Inn which was bad start. As Jack had warned me, they did indeed sleep underground in the drafty slot known as Fingal’s Cave, lined-up head-to-toe.

After that, I mainly remember that Jack was the leading climber in the group, incredibly strong whereas my arms were not yet developed. That first weekend, Jack led Froth and I went middle man with Gerry Langsley last. Froth was

graded Exceptionally Severe then, a recently invented and short-lived grade one step up from any others which was intimidating and I recall my arms being completely shot. As Froth is not, in reality, very hard it just meant that I was a weak kid who hadn’t yet learnt about footholds. We also did What the Hell at Extremely Severe which was equally exhausting and the other Exceptionally Severe, Sin, both also over-graded. Life had taken a sudden turn in a hard direction rather like a child moving up to senior school and I was very much the baby of the group, known as Little Geoff which sticks to this day and to some extent, Jack was the harsh prefect. Nevertheless, we formed a partnership where he led the climbs and I held the rope and did what I was told.

In the surviving club records, the first Minute I have is dated 17th January 1963 in which reference is made to the hut, that being the first floor room at

the gable end of Lover’s Leap Cafe which for a while had stone steps up to a door and was rented from the cafe proprietor, Eric, for some ten shillings per week. This was the second Eric who had only recently taken over from another Eric who reigned through the 1950s. The hut was one room with a door and two windows. At first we slept on the floor but eventually bunks were built. The first item on the Minute was: UNPAID LODGING FEES. It was proposed that due to the number of people staying at the hut, who, if when the time came to pay on Sunday, they hadn’t sufficient money to pay, that all charges should be paid on Saturday before anyone had bedded down for

the night. This was just the beginning of a disregard for any rules which lasted for the life of the tenure and when fees could be collected, it enabled hearty breakfasts at the club’s expense. It was just the done thing and rumours and slander regarding club funds persist to this day. Nevertheless, bunks were constructed, old mattresses acquired  as cast offs from the YWCA which seemed fine then but looking at the photographs now it is a wonder that we didn’t get fleas or diseases. We also acquired electricity, water and a giant Primus stove known fondly as Big Bertha which produced so much heat that you dare not let go of a Billy Can of beans. It was a case of a quick hold over-and-off before the food burnt. You will also see from the photographs that we acquired a sink but obviously no means of cleaning it. There were a couple of books kept in the hut for recording those who stayed and paid and for general commentary which typically was harsh and funny. Many of the new routes done by us were recorded therein.