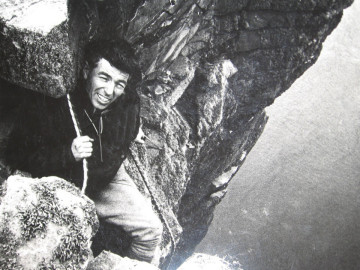 From 1933 there is no known of climbing here until Joe Brown and others from the Nottingham based Valkyrie Club took an interest. Joe recalls starting to climb there from about 1950 and such was the way then that they climbed in any weather, so much so that he recalls a snow blizzard so severe that they actually failed to find Stoney Middleton at all.

The Valkyrie members merged into the Manchester Rock & Ice Club

which was formed in 1951. Like generations after, they camped on The Promenade and climbed a number of routes which went unrecorded until the West guidebook came out in 1961 in which Stoney was included at the back under ‘Other Cliffs’; a far cry from the future days when climbers came from all over the world to hang out at Lover’s Leap Cafe.
In the West guide’s history, Graham West records:

From the thirties till the early fifties, the crag’s history is shrouded in mystery, then Joe Brown and others, members of the old Valkyrie Club, visited the crag a number of times and put up some fine routes. One of the routes followed the line of ‘Golden Gate’ but finished up a grass bank over to the left of the present arête finish. An artificial climb (Kink) originally named ‘Brown’s Overhang’, was also done and it still remains a tough exercise in exposed aerobatics, with a solitary wedge on the lip of the overhang to tell of this early ascent. Some climbing was also done around the ‘Tower of Babel’ but references are again vague.’

Although the Valkyrie reformed themselves as the renowned Rock and Ice, the latter group didn’t contribute to any further development at Stoney apart from one of its younger members, Dennis Gray who recounts

On Little Capucin, I was climbing with John Ramsden, a gentle giant a good few years older than myself. I climbed up and belayed under the overhang. Ram climbed through and put a piton in at the roof. We had borrowed a hammer and some pitons off Arthur Dolphin. On the top wall Ram fell when a hold broke; holding his much greater weight almost choked me. I took over and managed to complete the climb, using the peg Ram had placed for direct aid. It is not true that we used any more than that one piton. Ram then seconded the climb but could not remove the piton I remember the top section was frighteningly loose.