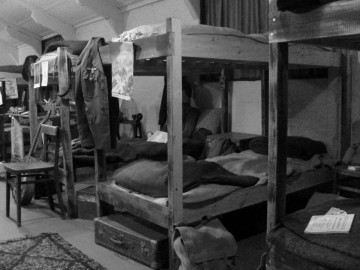 In 1940 the world was at war, an act which was to have a profound effect on hundreds of thousands of people the world over. Stoney Middleton, a remote village in Derbyshire was to be no different. The village was an industrial village centred on limestone quarrying, the stone was used directly for construction and road building as well as to supply the tarmac plant in Darlton quarry. Materials essential for construction, and to repair and replace damaged infrastructure resulting from German bombings. Fluorspar an essential mineral produced from limestone was also produced in the village, an essential material for the steel mills of Sheffield who in turn provided the steel for the armament factories making everything from bullets to ships.

The following account of the Stoney Middleton camp is drawn from the memories of local people who gave personal accounts of the camp, both from inside as a prisoner, as well as from the people of the village who remembered well the effects the camp and its occupants had on the village. At the time of writing little recorded evidence of the camp had been found. Lois Bekeris, Kath Heginbotham, Cesare Dati, Norman Bettney, Lance Hancock, Dennis Mason and the Longden family, the last residents of Farnsley farm provided accounts of the camp, along with a written account from Cesare Soldati. Their detailed recorded accounts are available in full by following the links

The camp was originally established as a military encampment at the beginning of the war, manned, by the Lancashire Fusiliers. The camp housed powerful searchlights and machine guns, placed to protect the production of essential materials from the quarries, searching out and shooting down any attempted German bomb attack. The camp was built on land between Middleton Hall and Calver, now the Meadow Close development. The buildings that housed the troops were typical Nissen huts, sadly nothing remains of the camp beyond one photograph taken by Lois Bekeris.

At some point and for no known reason the camp was latterly converted to a prisoner of war camp, initially housing Italians, who were particularly happy residents, the accounts of both Cesares’ make it clear that they had little desire to be fighting in a war they didn’t want to be involved in. They also

provide an interesting insight into the reputation of the British by their desire to be captured by them. Cesare Soldati tells us that being captured by the English was not a mistake at all, because in Middleton we had food, chocolate and cigarettes, all of which was hard to come by in wartime Italy.

Cesare Dati tells a sadder story of being conscripted into any army at eighteen to fight a war he felt no connection to, sent to Africa before his platoon were almost wiped out during an air raid, his surviving colleagues relieved when eventually captured by the British, however his journey back to Britain overseen by the Moroccan army was far from pleasant. They were crammed into tiny spaces and provided little food or water during the weeks it took to get to England. In contrast he tells with much pride how the British treated him on his arrival and thereafter throughout his stay.

Read more and Listen to the story of Cesare Dati

Work of the POW’s

The prisoners were put to work in the quarries, principally breaking the limestone into small pieces suitable for road and railway building. They had a good life and seemed to have enjoyed their time in the village. Camp rules allowed the prisoners much freedom and they were allowed to come and go

as they wished provided they be back in camp by 10pm. The Italians were popular amongst the villagers and Kath Heginbotham recalls how one particular Italian was a regular visitor at their house having been invited for tea. They were a particular hit amongst the girls of the village who were presumably short of male attention, the local lads having been called up and sent to fight. Both Cesares’ remembered well their friendships which Cesare Dati recalled with a certain twinkle in his eye. They made good use of their time, maintaining immaculate gardens with beautiful flowers, the result of seed given to them by local people. They also seemed particularly adept at handycraft, fashioning jewellery and children’s toys made from whatever they could get their hands on. Cesare Soldati tells of one particular ring he made for a young lady called Olive, made from a silver fork stolen from her parents, having presented her the ring she would neither pay for it nor give it back, it’s easy to wonder if she had other ideas for the ring’s significance.

POW’s and the village

Football was, as might be imagined a popular pastime for the men, a memory remembered well by Norman Bettney who was particularly adept at the game himself; he recalled how games were arranged between the camp and the village although he didn’t say who the better were. All recollections gave the clear impression that relationships between the Italians and the village were happy ones, they being happy to be here, saved from the fighting and we, happy to have them to help maintain essential production from the quarry. At some point the Italian prisoners were released and allowed to return home, an occasion not without sadness, leaving behind good friendships.

The camp was however put to further good use and became home to Germans prisoners. Although not allowed the same freedom afforded to the Italians, they were nonetheless allowed some freedom. The Longdens recall the very grateful help they received running their farm from one particular prisoner assigned to them. Lance Hancock tells of his friendship with a German prisoner which continued for many years following the end of the war.

After the war ended and the Germans returned home, the empty camp provided for displaced persons who for various reasons were unable to return home. In the case of the Stoney Middleton camp displaced persons consisted of Latvians who also worked locally on farms and in the quarries. Naturally their freedom was unrestricted and they mixed freely with the local villagers and were equally popular with local girls, friendships which resulted in three marriages to local girls, two staying on in the village for the rest of their lives.

One wife Lois Bekeris tells her story of life with Janis, who she described as a particularly handsome man who won her heart almost immediately. Forced to leave home at 18 to fight the Russians, he was wounded, before being captured and imprisoned by the Germans. He endured untold times before being freed by the Americans and left to make his way across Europe and eventually to Britain. After a short spell in North Cave he decided to come to Stoney Middleton, once here he worked hard locally, and eventually took a position at the local Glebe Mine becoming a superintendent. Hard work came easily to the Latvians, as did the pleasure of a drink and many a drunken party was held whenever the Latvian men got together. Janis never returned home and one hopes the happiness of his life in Stoney went a long way to compensate him for his forced departure from his home, and the uncertainties which prevented his return.