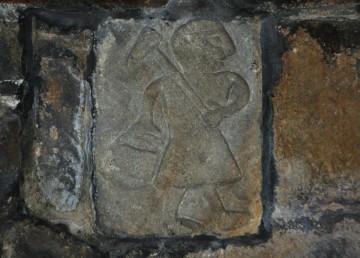 Local Resident Graham Armitage is the author of the Stoney Middleton book ‘The Forgotten Village’. The following is an extract from that book.

Putting together a comprehensive history of the village and area up to the beginning of the twentieth century and what might be called the modern era is not the easiest of tasks, given the limited amount of information available, and what follows can only be a summary at best. However, what I have learned very quickly from undertaking the research for this book is how crucial it is to have some kind of record made for posterity before information vanishes forever into the mists of time.

The Stone Age, the Bronze Age, Ancient Britons and Romans.

We can start by recording that Stoney Middleton sits at the head of a flood plain where the outflow of numerous springs (known locally by names such as Dale Brook and Stone Brook for example), converge and flow into the River Derwent.

This fertile floodplain would have been rich in species for hunting, and there is evidence that during the Mesolithic or Middle Stone Age period hunter gatherers did enter the area. Said evidence consists of tools called microliths dating from this period, found on Trinkey Lane, the Stoney Middleton allotments, Jera Meadows and Coombs Dale.

In archeological terms the Mesolithic Age ended approximately in four thousand B.C. leading to the Neolithic (New Stone Age) and then the Bronze Age.

Thus, we have evidence of some degree of human occupation in the area over four thousand years ago, albeit whether there were actual settlements or not remains uncertain.

Moving on to Neolithic and Bronze Age matters. There is considerable evidence of burials from this period, with burial mounds having been discovered on Eyam Moor, Middleton Moor, Longstone Moor, a few in Coombs Dale and one above the old limestone quarries in Calver. In addition, a Neolithic/Bronze Age excarnation platform was excavated at High Rake in the mid nineteen nineties.

This has the effect of ringing the Stoney Middleton floodplain area with funereal monuments. We can also record that stone circles exist on Froggatt Edge and Eyam Moor.

Moreover, there is clear evidence of occupation and cultivation between Froggatt Edge and White Edge.

All of this would strongly suggest that the Stoney Middleton area did also have human occupation and possible settlement in the Neolithic and Bronze Age periods, although, in the interests of strict accuracy, there have been no actual finds in the village itself.

According to Thomas Cowen in his ‘History of The Village of Stoney Middleton’, the earliest record of settlement and habitation in Stoney Middleton, was in approximately 2300 B.C. Mr Cowen attributes this settlement to the Celts, and it was for some time my intention to repeat this statement in this book.

Following discussions with local archeologist Reuben Thorpe, however, I gather that the term, ‘Celt’, is one which is the subject of some debate as to its precise meaning, and that in any event, the period usually associated with the Celts in archeological terms began in 800 B.C.

In fact, the 1977 Archaeological Survey of Stoney Middleton refers to this as the Beaker period, as a result of a beaker estimated as being from the second millennium B.C. having been found in 1900. The item is described as: ‘some nineteen inches high, ornamental with horizontal lines and trellis pattern’.

Beakers of this type are usually associated with the Neolithic/Bronze Age period and are ceramic vessels most likely used for domestic purposes.

In summary therefore, it seems likely that there was actual settlement from around the period 2000 B.C. in Stoney Middleton, (although quite possibly considerably sooner) and human visitation to the area from around 4000 B.C.

If a term is to be ascribed to these people, it is probably best to refer to them as Ancient Britons.

Evidence suggests that, at least until the arrival of the Romans into the area, the population was accommodated largely in mud huts protected from wild beasts and potential marauders by a large surrounding hedge or, ‘tun’ – the first indication we have as to how the village may have come by its name – a subject to which we will return to in due course.

Life for these early inhabitants seems to have flowed along as peacefully and regularly as the thermal waters, until the Roman Occupation of Britain during which Thomas Cowen tells us that the sixth legion marched through ‘Middleton and Brough’, and credits them with eventually setting up a small settlement on a nearby hillside which they named Castra Bank. A major fort called Navio was also set up at what is now the village of Brough.

Again however, I am advised that it is more likely archeologically, that Castra Bank was built during the Anglo-Saxon period – little is simple in these matters.

Specific evidence of the Roman presence is the finding in 1814 of a hoard of at least one hundred mainly copper, Roman coins deriving from the reigns of emperors Probus, Gallienus and Victorinus.

In addition, a pair of ‘Armillae’ were discovered in 1866. These are bracelets made from very base silver and copper and each has a crude attempt at a snake-head ornament by way of embellishment. The 1977 Archeological Survey dates them as between AD 138 and 160 and they were found near Carlswark Cavern.

Interestingly, the find was first recorded in the Reliquary, a quarterly archaeological journal and review in 1868. The Reliquary described itself charmingly as: ‘A depositary for precious relics, legendary, biographical and historical’.

The Romans also discovered lead in the local limestone and instituted the practice of lead mining, which was to become a staple industry for the area for centuries. Quarrying, another major local industry, also originated with the Romans, no doubt seeking a supply of stone for their road building enterprises.

As one might imagine, most of the actual physical work involved in the mining and quarrying appears to have been undertaken by prisoners of war and the local members of the conquered population. Remuneration was limited to say the least, with the main benefit to be derived by the workforce being the ability to obtain stone which then began to be used for people to build their own homes.

Mr Cowen tells us that homes were built on rock ledges and also ‘in the ground’, by which I take him to mean at or below ground level and adorned with thatched roofs. He also tells us that this practice continued until the middle of the nineteenth century.