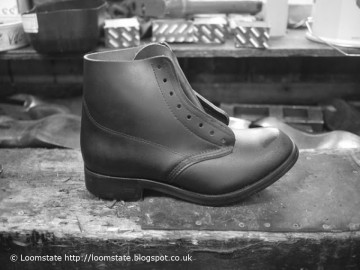 Boot making in Stoney Middleton was first recorded in 1797 at Pine View, a small cottage off High Street. By the turn of the last century (1900) the tradition of boot making had expanded into family concerns, and became a major industry for the village. The Stoney Middleton factories only produced mens heavy duty working boots including boots for the army in WWI. The village is also home to the invention of the steel toe capped boot.

100 years ago, villages the size of Stoney Middleton, Eyam and Calver would have had at least one shoe and boot maker to keep its population well shod, and would have been capable of making 5 or more pairs each week even that long ago. So why did the villages end up with over a dozen shoe factories employing one third of the adult population as well as most children over the age of 14.

The area had some natural advantages over many places: a ready supply of good quality cattle from the local farms, good water supplies from the free flowing Derwent River, and a plentiful supply of lime for the leather tannery which was built in Grindleford. There was also plenty of cheap and skilled labour as the silk industry disappeared in the area.

As far back as the 1830s, there were also tanneries in Eyam, Hathersage, Calver, Tideswell and Peak Forest, but these would have been much smaller and supplying local needs only. By 1910 all but Grindleford tannery had gone. It had expanded to supply the whole area with superior quality leather, especially suitable for the heavy working boot maker.

The tanning process has changed little in the last 100 years.  Once the animals are slaughtered and skinned, the hides are passed though large vats of lime to loosen the hairs away.  After stripping, the hides are washed and dipped in tanning made from oak bark.  They are then washed, died, oiled and polished. Heavy skins will have a final dip in paraffin grease for a waterproof finish, making them suitable for use in the heavy work boots traditionally made in the factories in Stoney Middleton.

The early use of simple shoe and boot making machinery made it possible to do more work in less space, this allowed family members to work together and create more jobs for the villagers.

By 1891 around one in three of the population of the local area above the age of thirteen were employed in the shoe factories or working from home.

In 1895 there were half a dozen shoe factories in Stoney Middleton, with many more in Eyam and Calver.  The wages paid were less than £1 per week for a 59 hour week, half that of their equivalent workers elsewhere in the country.

The working hours were from 6am to 6pm with unpaid breaks for breakfast and dinner, and then 6am till 1pm on Saturdays.  There were no facilities to eat in the factories; workers would have to walk home for their breaks.  There were no unions to protect workers rights and workers could be sacked without notice for the slightest misdemeanours.

Increased mechanisation allowed the larger businesses to work more efficiently, this put more pressure on smaller family businesses to compete for the work.  Several smaller factories were forced out of business by the expanding industry in Norwich, Northampton and Leicester. This was despite the better wages paid in those areas.

The factories in Stoney Middleton were: Cockers, Goddards (top storey of the Malthouse);  Heginbothams at Prefect House (and later in Calver as well); Hinch and Mycock at Dale Bottom; Mason Brothers & Lennon (which moved into the Mill owned by Joseph ) in 1903; and Nugent’s at Craigsteads (formerly occupied by Luther Heginbotham)

Most of the buildings used as factories in Eyam still remain today. There were seven main factories owned by companies such as Ridgeway & Willis, Robinson’s, West’s, Ridgeway Brothers and Ireland & Froggatt. All the remaining factories have been converted into private housing.

West’s factory was eventually demolished in 1970.

Joseph Heginbotham established his family business in 1884 with his sons Luther, Mathew, William, and Harry the inventor of the steel toe cap boot originally made for miners in 1933. The family business had various factories in the village, including Craigstead (1896-97) a brick built factory on High Street as well as what is now Prefect House next to the butchers on The Dale.

In December 1917 John Buckle, an officer for (NUBSO) The National Union of Boot and Shoe Operatives was asked to help the local factory workers as part of his national role. The following month the Eyam branch of the union was formed with 43 male and 46 female members. No workers from Stoney Middleton joined the union at first, partly due to intimidation from the factory owners. Many however joined once the branch was formed.

They work 59 hours week, no bonus paid, and wages were near the bone. The worst I have seen. Can something be done for them? God help them all.

On 12th January Mr William Slater, the Eyam Branch secretary was given 1 weeks notice by his employers Ridgeway Brothers who stated – he would have no dictation from the union.  Mr Tom Barber the Branch president is also sacked by E. West and Son. The sackings continued.

Upon being told there would be no dispensation from joining the army, most factories were now making army as well as work boots. (It is said that the factories in the Hope Valley made around 1 million pairs of army boots during the First World War).

The strike for better pay and conditions started on February 28th, with 7 firms involved.

At the time of the strike there was:

By the early months of 1919 enough money had been raised by the Union and by donations from Sheffield munitions workers to open a factory in Eyam for female workers to take them off strike pay. The factory opened in 1920. Their decision to pay Union rates placed extra pressure on the factory owners to settle.

In Stoney Middleton, factory owner Mr Heginbotham settled paying £2 7/- (£2.35) for 50 hours, but non-union workers were paid a higher rate of £2.10/- (£2.50).  Many of the factories still resisted the changes and their workers were forced into accepting lower paid work. Despite improved terms and conditions, the unions were still unwelcome in many of the factories. The industry would never be the same again.  Factory rules

Stoney Middleton has a flourishing industry-boot-making. There are no fewer than six factories, one is more than. a hundred years old. I asked the advice of a small boy, playing with an old motor tyre, which one I should visit. “Yon’s best,” he said, pointing up the hill – If you take boots there, they come back better than new. This was high praise, so along I went, and found a room crowded with benches, where men were making massive hob-nailed boots. No light ladies’ footwear is made here. Only solid boots, which will last a life-time, and are guaranteed to keep out the wet, even in flood time. The weight of a finished pair is a revelation. 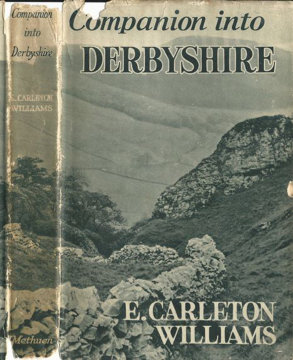 At first the noise seemed overwhelming. The clang of machines driving in rivets; the whirr of sewing machines; the friction of emery wheels, all blended into a subdued roar, yet in the tumult, each machine kept its individual noise. Gradually as my ears became accustomed to the din, I began to watch the process of boot-making. At the cutting table, a man with a sharp knife and keen eye was cutting uppers and tongues from a large sheet of leather. He measured the strip with his eye, laid on the pattern, and cut so that not a scrap of leather was wasted. Next, girl machinists were stitching the sides together, their needles passing through the thick leather as though it were chiffon. Another girl pressed the backs in a machine, while a third inserted the eyelets, which poured down a tube and were fastened into place, while she worked a foot pedal. Meanwhile another machine was cutting soles, and these were joined to the uppers by young boys, who knocked in the nails.

Downstairs heavy machines were completing the process of turning leather into finished boots. Here the clang was deafening. Two elderly workmen, veterans in their craft, were knocking iron “tackets” into the soles in neat rows; a more difficult art than anyone would suspect by watching them. Then came the last stage of all, when the leather was smoothed with an emery wheel, and any fragments rounded off with a sharp knife. The finished products are piled up by the door, and Stoney Middleton may well be proud of its industry, for it boasts that its products are sent to all parts of the world.

William Lennon is the only remaining boot factory to survive in the area.  They have been making heavy boots for agriculture and industry in the same factory since 1904.  Now into their fourth generation, the family company was established in 1899 to service the then burgeoning local quarrying and lead mining industries with quality work boots.

In 2010 The Cordwainer became the first new shoemaking business in the area for 100 years.  Located near Bradwell, the Cordwainer manufactures bespoke orthopaedic footwear.

Local historian Steve Bond and shoemaker Philip Taylor have been compiling information about the shoe factories and the strike, with the intention of creating permanent displays at the new Heritage Centre in Stoney Middleton and Eyam Museum.

We are particularly interested to hear from relatives and descendants of those who owned and worked in the shoe factories, and those who remember the locations and names of the factory owners in the area.