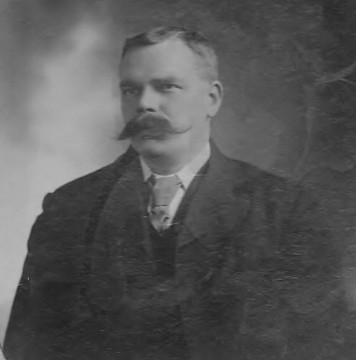 The only remaining heavy duty safety footwear manufacturer in the UK is Wm Lennon & Co Ltd based in Stoney Middleton. The company was founded in  1899 by William Anthony Lennon (1873-1940).

William was born in 1873 at 53, Caton Street, Hulme, Chorlton, Manchester, the second of four children born to William Nelson and Hannah Gibson Lennon. When William was 11 years old he was placed in an orphanage after the death of both parents who succumbed to tuberculosis, a common illness in the industrial areas of Manchester where his father worked as a packer.

His remaining siblings – Robert who was his elder brother is thought to have gone to live with his grandfather (also called William) in Birmingham, but have no concrete proof of this as he lost touch with the family. His sister Lillian aged 5 was taken to Llandudno and brought up by her maiden aunt

Elizabeth, sister to Williams father. Lillian or Lily as she was called by the family helped her aunt run a bed and breakfast establishment in the seaside town, and died there and was buried with her aunt in the cemetery of St. Tudnos Church which stands at the top of the Great Orme in Llandudno.

His younger sister Edith Margaret – known as Maggie was only 3 years old when her parents died and she was adopted by a Mormon family – John Roskill Holt and his second wife Anna Sophia Ashworth who later emigrated to America when Maggie was around the age of 12. Read about Edith Margaret Lennon (Maggie)

William came to the area to become an apprentice in the bootmaking industry. He eventually set up a partnership of Mason Bros. and Lennon, eventually setting up alone in the early 1900s in the the mill which is still run by a fourth generation of the Lennon family.

William was married to Stoney Middleton girl Charlotte Goddard, the daughter of Henry and Ellen Housley Goddard until his death in 1940. They had nine children (6 boys and 3 girls). All who had parts to play in the success of the family firm.

His sons – Arthur, Percy, William, Ebenezer, Sidney & Arnold. His daughters – Lily, Maggie & Charlotte. His wife Charlotte took in paying guests (or lodgers as they were called in those days) to help to pay for the machinery to set up the boot factory, (there was no leasing or hire purchase in those days) and with the help of her young daughters Maggie and Charlotte (Lottie) managed to cook, feed and clean for all the family and guests.

The rest of the family went to work in the Boot Factory – Lily being in charge of the office and Percy, Ebenezer, Sidney & Arnold working on the shop floor, eventually becoming directors in the business. Their son William died at a young age through an epileptic fit, and sadly their eldest son Arthur was killed in the First World War at the age of 19, on 31st December 1917, after volunteering to cover stretcher bearing duties after his friend was taken ill.

Arthur joined the Sherwood Foresters Regiment at the age of 17, and was accepted because he was tall and looked older. My mother told me that when he came home on leave his underwear and uniform

were covered in lice and fleas owing to the horrendous conditions they had to endure in the trenches.

Like many other village boys, they thought they were going on a great adventure, and the war would be over quickly. Little did they know of the horrors and sights they would encounter!

He was laid to rest in a Commonwealth War Grave and commemorated as follows:-

William Anthony died in 1940 at the age of 67, having suffered from a stroke. His wife Charlotte died in 1954 aged 80. Both buried in Stoney Middleton cemetery.

In December 1936 William was the recipient of a full size photograph of himself by members of the Determined Lodge of Oddfellows as a mark of appreciation of his II services as Secretary for the past 37 years” The picture shows him wearing his chain of office of which he and his family were very proud and appreciative of this wonderful tribute.

A citation taken from the Derbyshire Times reads as follow:-

An interesting presentation took place at Mr. W. Lennons home, The Dale, Stoney Middleton’! on Saturday, when Mr. William Lennon was the recipient of a life size photograph of himself with the following inscription “Presented to Brother William Lennon by the members of the Determined Lodge of Oddfellows as a mark of appreciation of his services for the past 37 years December 1936.”

Mr. Thomas Carter, Treasurer, who made the presentation spoke of the good work Mr. Lennon has done for the Lodge and the village, and said that if Stoney Middleton had been a city he would have been the first Lord Mayor.

Mr. E. Maltby, representing the district, presented Mr. Lennon with an up-to-date barometer on behalf of the Lodge, and spoke of the high esteem in which Mr. Lennon held throughout the district. As a panel auditor, he had always found Mr. Lennon’s books were a credit wherever they went to be audited.

Mr. Lennon in expressing his thanks. said it was always his wish that the society should prosper, and be properly carried on.

Mr. Lennon has always done good work on the insurance committee in the Baslow and Buxton district. He is the head of the firm of Messrs. W. Lennon & Sons, boot manufacturers, Stoney Middleton.