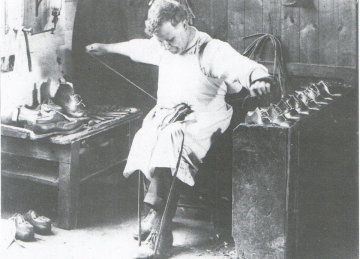 Joseph Heginbotham was a very important part of Stoney Middleton’s history. He stablished his family business in 1884 with his sons Luther, Mathew, William, and Harry the inventor of the steel toe cap boot originally made for miners in 1933.

The family business had various factories in the village, including Craigstead (1896-97) a brick built factory on High Street as well as what is now Prefect House next to the butchers on The Dale.

The family history has been reserched extensively by Jeremy Greenwood who has provided his work for the benefit of others which is very much appreciated by us and I am sure by countless others to follow. Jeremy comments:

The Heginbothams in Stoney Middleton  are linked to those at Cadster mill by reason of the barytes mines. The family originated in the Goyt valley but lost parish records defeat absolute proof of this. Strangely the family in Tideswell/Hucklows seem oblivious of those in S Middleton. The family tree is my interpretation – there are others. Note connection to A A Milne