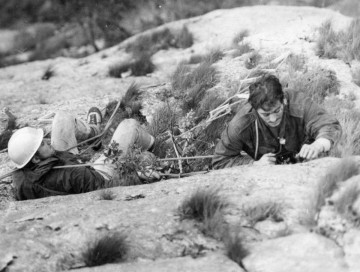 Graham West (main picture) leading on Bastion Wall High Tor. West records an amusing tale to this route which demonstrates claims and counter-claims are nothing new. It reads:

Bastion Wall was also climbed during 1957, this again being the subject of an unfortunate controversy, which happened as follows. J. Hadfield, R. Hughes and myself climbed the first two pitches of the route then retired with intentions of finishing it the following week. Unfortunately we returned three weeks later only to find that the route had been finished. Subsequently we found out that the people responsible were T.Peck and P.Biven, who thought that the route had been abandoned. In the description of the climb, written by Biven, he mentions that the first

pitch needed four to five pitons, but that he found the astronomical number of twenty-six in position. However, if this was so, it would mean that the pitons could have been only fourteen inches apart, because the length of the first pitch is only thirty feet. Actually, I myself led this first pitch and used only three pitons. [Readers may like to read Biven’s comments in the book Peak Rock.]

The guidebook, Rock Climbs on the Mountain Limestone of Derbyshire by Graham West and published by the Manchester Gritstone Climbing Club in 1961 was probably the first guidebook to limestone climbing in Britain and its influence on the development of climbing throughout the UK is not to be underestimated .

West was from the east side of the Pennines in Lancashire. His reputation was already established having been the leading light of this Lancastrian group pioneering numerous new routes in particular in Water-cum-Jolly (aka Millers Dale) and Chee Dale, where West was known for the relatively new art of artificial climbing with such routes as Mecca on Raven Tor and Big Plum in Chee Dale. Indeed, this group were pre-eminent in the exploration of limestone in Britain running against the long standing attitudes towards its unfriendly loose nature. Derbyshire limestone was indeed loose, dirty and unfriendly but all it needed was some tender loving care which the Manchester Grit boys gave it. Their activities and the publication of the West guidebook are not to be underestimated in the development of climbing throughout the UK. Tragically, Graham West was killed in an avalanche in the Pennines. It was reported in a newspaper that: ‘The bodies of Graham West, 29, of Stalybridge, and Michael Roberts, 27, from Dukinfield, were found under 20-feet of snow at the foot of the gully at Chew Brook, four miles from Greenfield on Sunday January 20th1963.’ Mike Roberts is not to be confused with Barry Roberts who made first ascents with West.

I never understood why the Manchester Grit lads were more taken by the other limestone dales rather than Stoney. Maybe that was to do with the prevailing interest of aid climbing so closely related to limestone at that time and the impressive Raven Tor, Plum Buttress and the like would have been tempting targets for pegging and bolting. Maybe that was the case but Malc Baxter has just explained to me: ‘We didn’t do much at Stoney because there was an implicit understanding that the SUMC were exploring that patch and we (following Graham as senior leader) were exploring our patch.’

A lost climb in the

Rock Climbs on the Mountain Limestone of Derbyshire

There were several confusing route descriptions in the West guide all of which could be indentified apart from this one described thus:

Handy Groove 70ft Severe
From the bottom of the Concave Face scramble up the right-hand side of the buttress. A ledge leading out to the right gives the start of the route.
Climb the obvious groove to the top of the crag.

Nobody has ever come up with a definite identification of this climb as every idea has a contradiction. I can only think of one concave face with ledges at the bottom from which you could traverse rightwards and that would essentially be the first pitch of Aurora but that is not a groove. It might be that the scrambling described is up to the foot of the second pitch of Aurora. I suspect this was written from memory after some years and not quite accurate.
Any ideas welcome.