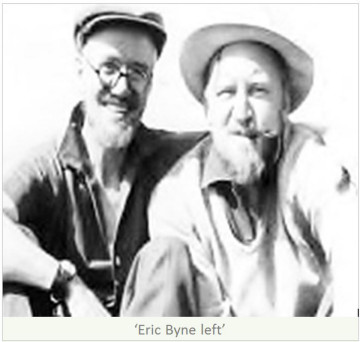 Very little was written about limestone after 1918 apart from Puttrell’s newspaper articles until the Graham West 1961 guidebook ‘Rock Climbs on the Mountain Limestone of Derbyshire’ was published. However, Eric Byne and Clifford Moyer climbed some routes of which there are no specific records though Byne, a joint author of High Peak who wrote the section covering this period records:

“After this [1918] no one seems to have recorded any activity on limestone until the early thirties. Byne and Moyer made a climb now called White Knight at Stoney Middleton, but were put off by a fatal accident to a friend.”

We now arrive at the momentous 1933 and the notable Frank Elliott. His real mark on limestone was at Stoney Middleton where in 1933, along with Gilbert Ellis and Dover he made the first ascent of the longest vertical climb there up the bounds of the right arête of Windy Buttress. This was all done on -sight with no pegs, nor even any runners, a very serious undertaking. In an interview by Gordon Stainforth for the book ‘The Peak: Past and Present’, Elliott recalls at the age of 93, some 70 years on: “There was a lot of gardening. It was pretty rotten. There was tons of loose rock. We were chucking it down all the time…. It starts with quite a sheer buttress and we had an awful job to get up that to a ledge. I wasn’t in the lead all the time, I think Gilbert Ellis did a bit of leading as well. By then we may have had a longer rope, a Belfast half inch made of hemp”

The second pitch is a long groove, still loose to this day which one exits close to the top with a step left on to the arête with breath-taking exposure. From there it is a short straightforward way to the top. All taken, it was a magnificent effort named at the time ‘Great Ridge’ but subsequently named Aurora, maybe because the upper groove faces east and catches the morning sun.

Dave Johnson describes the route in the West guide of 1961:

The narrow ridge rising from the lowest trees soars clean to the top of Windy Buttress, stopping the right end of the crag and blocking Windy Ledge itself. The route is superb with an unforgettable character; it faces east and so catches the sunlight – to the dawn it is dedicated.
115ft. Begin at the very lowest rock of the ridge, gaining twenty feet by good ledges before avoiding an overhang by going off to the right. Immediately swing back left above the bulge and mantelshelf on to a narrow ledge. From here climb the ridge all the way, on occasionally bad rock, to a wide pavement which is the continuation of Windy Ledge (see Tigertrot) beyond the blocking ridge. There is a nasty moment high on this pitch at a bulging unsound wall. It is taken direct just right of the ridge.

115ft. The actual arête has overhanging juts of rock above – the route therefore lies up the long groove in its right flank. This groove grows increasingly awkward for thirty feet until it relents into unsound rock. Follow the crack on very steep rock using scarce holds until a slight break is reached some eight feet above the stance. From here it is possible to push on straight up the groove but infinitely finer to creep out left on to the brim of the arête to a free standing altar where a sheer wall falls away for two hundred feet on the left and behind. At present this is the last notable climb but further right, towards Stoney Middleton village, a great wealth of high, fierce buttresses rear up above the road. There is little doubt that these will yield routes of a similar character and quality as the rest of the crag.

[Highly unlikely because of the houses below. This is probably the best bit of unclimbed rock in England. Ed]