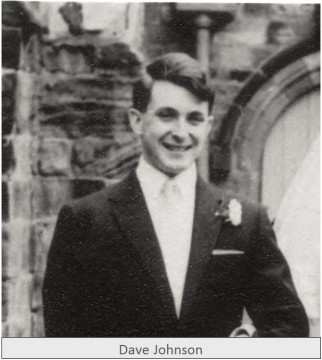 By 1957, a whole new generation arrived in the dale from the nearby Sheffield University. This group was largely spearheaded by Dave Johnson accompanied by such as Trevor Brooks, Jack Wade, John Childs and their mentors, Ron and Brenda Salt, overcame the horror stories about limestone and tackled the unclimbed rock as described in the SUMC Journal of 1958/59 by Dave Johnson:

“Quartets and Quartz Peak limestone, ha ha! This particular limestone contrives to cling together above Middleton dale, the local Cape Canaveral. Taboo! The unmentionable words “Stoney Middleton” have been uttered in a hushed Coffee Bar; in awe of the dreaded implications, climbers hastily turn to the Llanberis bus meet or John ’enry’s latest on Valkyrie – anything but talk of “that place” . Anyway who wants to climb 300 foot overhanging screes with no holds?

For some reason or other the crags of Stoney Middleton, whilst forming a widely admired dale of great splendour, have met with no sympathy from local climbers. Quaint fellows like Brown and Sutton made a few sallies at the things but apparently no one seriously considered the wider possibilities on the cliffs until the arrival of Johnson and his drunken quartet.

Pegs were the done things, the very aspect of the crags demanded them. So it was with some surprise that having pegged about a hundred feet up one pinnacle, the top sixty feet were found to go unaided. This resulted in a change of tactics – climbing ‘free’, I believe the term was and it was found that the great walls yielded. After immense quantities of rubble and pasture had been excavated, it indeed became possible to make peculiar upward thrutchings which in some cases resulted in a man reaching the top.

It was one climb a day stuff until the arrival of that fellow with the little truck (now then what’s his name?) [Jack Soper] Before he’d been there five minutes, there was another route up a grand groove (all ’orrible layback things). Over lunch, the residents and visitors evolved a quartet which blithely tackled a most ferocious crack with great success. Muttering wondrously, a further route was forced up a great overhang ‘Unconquerable’, followed by a hair-raising top pitch on quartz nodules up the edge of a dizzy arête. Never since that day has so much been done by so few on such little time.

There are now thirty routes, nearly all well over a hundred feet long at least Severe in standard. The routes are steep, exposed, occasionally loose and invariably tiring. The climber on them should have considerable ‘free’ experience and a working knowledge of all artificial techniques. This is no place to learn, no place for the ‘top rope and peg it’ types so sadly common elsewhere. Rather do we like to feel it is a place to mature, to acquire skills in handling bad rock on almost Alpine scale; a place for the connoisseur to delight in the unique delicacies of his art. We await the first connoisseur.”

A true connoisseur was indeed waiting in the wings as Johnson goes on to further describe in the history to the West guidebook which repeats some of the above:

“In the following three years, all the present routes were climbed, most of them presumably for the first time. The cliff had an almost evil reputation, forbidding appearance and bad rock being the major complaints.

Pitons were a natural resource and ‘The Tower of Babel’ the natural attraction. During the final stages of this ascent, Childs and Johnson were struck by the unsuspected free possibilities of this cliff. Subsequent outings saw ‘peculiar upward thrutchings’ being made which in some cases even resulted in a man reaching the top. This was termed, we believed, climbing ‘free’. An armed invasion of the rocks followed. Ice-axes, shovels, choppers, coal rakes, yard brushes, pruning shears, pokers – even a saw and a butcher’s knife were used to penetrate the jungles. ‘Minestrone’ was brewed whilst the Salts climbed ‘Horizon’. Johnson and Wade set out to inspect the possibility of pegging the grooves on the Tower of Babel and finished up climbing ‘Glory Road’ with no assistance at all – much to their amazement and terror.

One fine day, Jack Soper’s buggy rumbled up beneath the cliffs and a quartet comprising Soper, Nev Crowther, A.N. Other and Dave Johnson was formed. What the Hell was climbed, (Soper hadn’t been there five minutes when he was tearing away at Gabriel – all horrible layaway things in those days), The Golden Gate was climbed by its present route

and the day concluded with Thrutch which maimed everyone. The same quartet produced several other routes of fine character before the fates spread the members several destinies elsewhere.

“In the following spring, Sin and Froth were climbed and a glorious early morning was spent climbing into the dawn on Aurora. The Pearly Gates was another climb which everyone thought would need Rawlbolts until the surface scum was cleared. Wet days reduced exploration to Fingal’s Cave, now a fair network of climbs. At this juncture and for no apparent reason, Mellow and Johnson recalled an early visit to a nearby crag in Ravensdale. The Stoney tools were dropped and they devoted their attention to the ‘other place’ until a few months later, Dave Johnson journeyed north to Northumberland. With much wailing and weeping, Mellor was left with John Loy in Ravensdale where he is happily living happily ever after. Stoney Middleton remains for posterity and Eric’s tea”

What actually happened was that Dave Mellor emigrated to the Bahamas in the late sixties and it is from there that he recently sent his recollections of Windhover:

“Windhover was our classic climb. We did a couple of gardening drops to clean out the top crack with much screaming and shouting since you couldn’t hear anything from the belay at the top. I hammered a sledge iron in on the second go so that we could belay nearer the edge. We were also banging away at Kingdom Come at the same time and had found a lucrative source of pegs left by Biven and Peck on London Wall on Millstone which we borrowed. Apart from the initial overhanging move from Windy Ledge we reckoned that the route would go virtually free and were set to make our first attempt when we arrived on the crag on a Sunday morning to find that “our” route had been invaded by a bunch of yobs from Stockport . They were loaded down with pitons and wedges and spent all morning smashing away at the first bulge. We were quite civil but seething inside, cheeky bastards. Anyway they didn’t get very far and left the pegs in so we caught the early bus out the following Saturday and spent the weekend there.

I remember getting all knotted up and swinging energetically around on a home-made etrier at the first peg, which we never used again (the etrier) on subsequent ascents. After that it was fairly straightforward but wildly exposed and we were thankful for the next peg runner. Dave led all the way to the top and I followed and cleaned a couple of the pegs out which we used to crack the crux on Kingdom Come the following day. I know that Webby claimed the first ‘free’ ascent but I noticed that he pulled up on the initial peg as well which is exactly what we did the second time and that was the only ‘artificial’ move so far as we were concerned. We also prospected ‘The Flakes and you probably recollect a couple of wafer thin beech wood wedges along the traverse.

This all happened around November/December, I was 16 at the time and we didn’t do very much until early spring when we had a bit of a blitz and finished off Kingdom Come and added Pearly Gates, Froth and Wallop and the bottom pitch of Aurora with the front finish at the top of the main crack. After that, Dave acquired a Lambretta scooter and we were able to cruise further afield to Ravensdale where we again had the whole crag to ourselves until Johnny Loy joined us just before Dave left and we teamed up to pick off some of the classic lines like Via Vita.”

Although John Loy did not contribute to new routes at Stoney, he was a distinguished limestone climber of the late 50s and early 60s with his name closely associated to Ravensdale. In the Peak Climbing Club Journal of 1963, he records his early introduction to limestone which gives an insight into the thinking of that time

“It is not only since 1957 that limestone climbing has become at all popular to any degree in the Peak District. Around that time I made my first serious ventures onto any of the limestone cliffs in the district, my first intentions being to find somewhere that I could practise piton climbing and be out of the way of others.
Chee Dale was the first place to receive a visit as I had heard that some climbers had been putting up some routes in that area. We went to the wrong end of the dale of course and spent all our time and energy on a small outcrop. This was conquered by the use of numerous pitons up the great 30ft high face. The crag was about 30ft long as well and the route would have gone free if we had tried hard enough.”

The idea of going to find rock for aid climbing and realising the potential for free climbing is a recurring theme of this period. Loy continues. Spring 1960:

“A week or two later on another visit to the crag at Ravensdale, I found two other climbers ‘trespassing’ on ‘My own crag’. These were Dave Johnson, a Sheffield climber I know well, and a lad (then) called Dave Mellor. I tied-on to the end of their rope and was taken up a route they had pioneered for their first time the previous week called Scorpio. They must have been proud of it to repeat it so soon. The three of us then moved to the crack I had fallen from a few weeks previously and this time I managed to lead it making the first ascent. [Amain VS] That day of all the routes done, not one had a piton in it for direct aid.”

Around 1957, Brenda Salt was a teacher at Hurlfield Secondary Modern school in Sheffield, and

already a rock-climber with her husband Ron, when she was asked by a couple of pupils if she would take them climbing. The two boys were Dave Mellor and Dave Metcalf.Dave Johnson was a schoolboy on holiday in Wales and climbing alone when he was befriended by Ron Salt. Johnson eventually came to live in Sheffield and connected with Mellor via the Salts. Collectively they grouped together and were often referred to as Sheffield University Mountaineering Club.Mellor and Johnson went on to develop a number of free climbs at Stoney and elsewhere at a time when free climbing on limestone was not normal, in particular their spectacular Windhover. albeit with some pitons for aid on the first bit.Later, Brenda Salt would take a number of her pupils climbing, in particular, Jack Street who would go on to make his mark both at Stoney, nationally and as an alpinist. He was and still is the President of the Cioch Climbing Club who made a significant impact on Stoney and other Peak limestone in the 1960s.