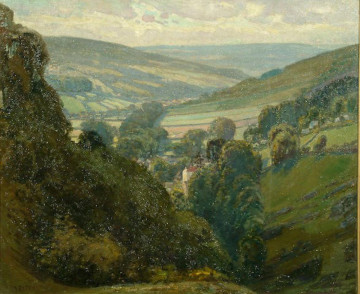 Of particular interest is a the distinctive style of art produced in the 1930’s by a group of friends who visited the home of Thomas Peters (1863 – 1939) in the Dale at Stoney Middleton (picture featured above). The most notable of whom were Sheffield artists Harry Epworth Allen RBA, PS (1894- 1958) and Stanley Royle RBA, ARWA, ARCA (1888- 1961) who painted extensively in Derbyshire. Peters lived at Spa Cottage, The Nook, Stoney Middleton – Peters himself was an accomplished artist and is believed to have designed an oak screen which still exists in St. Martins Church. Of particular local interest is a painting of Stoney Middleton by Peters which was sold in 2005.

Epworth Allen was from Hunter’s Bar, Sheffield and was awarded the Military Medal in World War I. He lost a leg in 1917. After the war he returned to the steel industry where he remained until he was made redundant in 1931, thereafter he relied upon his painting to support his  living until his death in 1958. This painting is of The Dale, Stoney Middleton (listed on the BBC’s your paintings). Resident Lois Bekeris who has previously contributed to SMHCCG, recalls that her father Peter Hall who worked at Eyam Quarry used to tend the horses depicted in the foreground. The painting shows an early lime kiln opposite Lover’s Leap Café.

RCA (Royal Canadian Academy of Arts), RBA (Royal Society of British Artists), ARWEA (1888–1961)  Stanley Royle who painted this picture (listed on the BBC’s your paintings) is perhaps the most celebrated painter to have visited the Dales. Originally from Stalybridge he spent most of his life in Sheffield. In the 1930’s he moved to Nova Scotia, to take up a teaching post and spent much of his time in Canada before returning to England in 1945.

A lesser known artist and former Stoney Middleton hairdresser is Walter Lambert Bell 1904 – 1983.   Many older Stoney Middleton residents will remember his salon/studio in the village where he also exhibited his works, they may well have some of his paintings gathering dust in their homes! With the help of a relative, Janet Gilbert and Graves Art Gallery I have put together the following biographical information about him. His birth was registered in Sheffield in 1904 Whilst inconclusive (1911 Census – Attercliffe, Sheffield), his father may have been Abe (steelworker) originally from Bleckworth, Notts and his mother Jane Cave Jackson (in service) originally from Portsmouth, Hampshire. He:

At some point in the 1930’s Walter and his wife ‘Sadie’ came to live in a flat opposite the Wesleyan Reform Chapel in Stoney Middleton. Walter ran a Ladies and Gentlemen’s Hairdressing business from a studio next to the joinery business of Lincoln Mason and his nephews which was in Stoney Middleton Dale (near The Lovers Leap).

He painted his pictures in oil in the studio and sold many scenic pictures of Derbyshire and Cornwall – mainly pictures of Cornish fishing villages (Megavissey) and surrounding areas.

Many of his paintings were commissioned by local people and he also turned his hand to floral and still life but his passion would appear to have been for landscapes and particularly coastal scenes. He must have travelled extensively and also produced paintings of Scotland and Canterbury.

He also sold paintings from an art gallery in Sheffield – where local artists from the area also displayed and sold their pictures. Walter is remembered as being …”quite a good looking man with wavy light grey hair, but later his features were covered with a beard.” At some point in the late 50’s/1960’s Walter & Sadie moved to the West Country – believed Cornwall. Their marriage eventually broke down and they divorced – Sadie came back to live in Sheffield where she worked in a Department Store until her retirement.

Usually his paintings are safe and competent oil landscapes. His seascapes in particular are very popular and command prices – low to mid £100’s. His Derbyshire paintings are still very affordable. The following painting is particularly intriguing. Presented to Graves Art Gallery in 1937, when the artist was 32 years of age. This would have been at the time he exhibited at the Royal Academy, London.

The style is surrealist influenced 1930’s – similar to that of Epworth Allen, who in turn was influenced by Edward Bawden & Eric Ravilious. Given its competence it begs the question why he chose not to continue to paint in that style. I would be particularly interested to know if there are any similar paintings in existence.

The painting (listed on BBC’s your paintings)shows Eyam Quarry, 17yrs earlier than the Epworth Allen painting

Other than an extensive number of works, some of which went into print, little is known about his life in the West Country. He died in 1983 in Tavistock, Devon. For some reason he is listed on art sites as William Lambert Bell, however he never used a forename and signed most of his works in capitals “W. LAMBERT BELL”

(This picture was sold at Christies)

Herbert Slater lived in Heeley, Sheffield and was the owner of the H M Slater cutlery company. He was a good amateur watercolourist and a member/president of Heeley Art club for 65 years. He was also a member of the Sheffield Society of Artists. Herbert was active as a painter for all of his adult life he was particularly fond of Stoney Middleton and frequently painted scenes in and around the village. A wooden seat near the foot of Jacob’s ladder is dedicated to him.