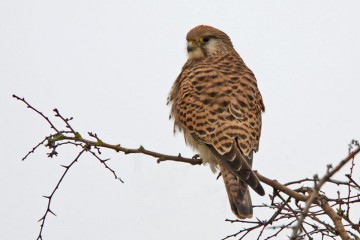 Stoney Middleton was once a working village with many quarries operating in the Dale.

However since the closure and restoration of these quarries there has been an increase in local wildlife making it an important wildlife location and a good location for bird watching. Birds to be seen include buzzards which look very much at home soaring and circling above the dramatic limestone crags of the dale, crags which have been successful breeding sites for kestrels.

On the edge of the village are the lagoons on Stoney Middleton moor, home to waders and roosting flocks of gulls, birds reported there include Curlew Sandpiper, Sanderling, Dunlin, Cuckoo, Temminck, Ringed Plovers, White Wag and Wheatear amongst others. The lagoons are also home to the amazing site of the starling murmurations an amazing spectacle, where the birds return from their daytime feeding grounds to roost in the lagoons reed bed. Starting with a small group, the birds are joined by other groups as dusk approaches to perform a breath-taking, aerial winter dance, in their tens of thousands before descending to the reed bed for the night and is a bird watchers delight.

Sights like this really are one of the most amazing wildlife spectacles on the planet and this particular roost is of county and national significance. At times it has been estimated that there have been nearly one hundred thousand birds here. These sites are incredibly important for starlings and given the dramatic drop in their numbers in the UK in recent years we need to do all we can for these birds.

Dan Arkle filmed the following clip which he has set to music and provided on You tube, thanks Dan.